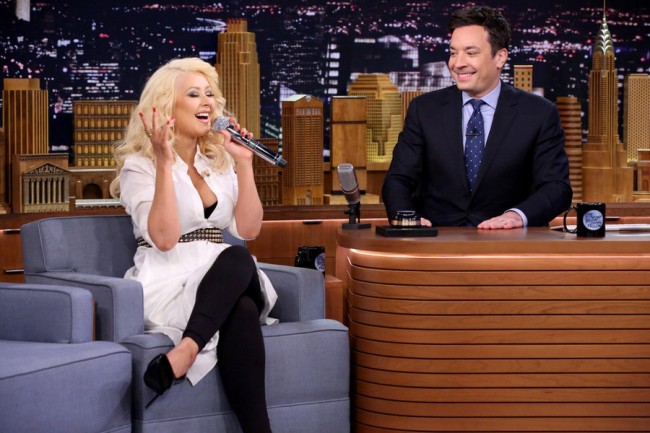 On The Tonight Show Starring Jimmy Fallon this Monday February 23, 2015, the host of the Tonight Show, Jimmy Fallon, had some great guests. The first guest of the show was Christina Aguilera of The Voice, and Fallon played Wheel of Musical Impressions with her later in the episode. Then, Survivor host Jeff Probst was another of Fallon’s guests, and the musical guest of the night was the amazing Kid Rock.

Jimmy Fallon began the Tonight Show with his monologue, after he welcomed his audience. They gave him a standing ovation. Fallon joked about topics from today’s headlines, like the Academy Awards. He said that Birdman was the biggest winner of the night. He joked about the designers of the dresses, saying that “John Travolta’s was designed by Madam Tussaud.” He joked about Eddie Redmayne also, and imitated Stephen Hawking.

Jimmy Fallon mentioned J.K. Simmons’ speech urging people to call their parents and talk to them. Fallon then acted like he was calling his parents. They acted like they did not hear or understand, and said “Huh?” and “What?” and the “mom” said “Give me the phone!” to Fallon’s “dad.”

Then, Jimmy Fallon mentioned a few Oscar awards that were not handed out. He said that “John Travolta won the award for looking like he was on Ecstasy,” or words to that affect.

Jimmy Fallon also joked about the “brutal weather,” around the country. He joked that “People in Miami had to microwave their cocaine.” He said this actually happened, that “A theater in Colorado accidentally played Fifty Shades of Grey instead of the Spongebob Squarepants movie to a theater full of kids.”

Jimmy Fallon announced who some guests would be later in the week, and he said that Christina Aguilera would be on tonight. They will play Wheel of Musical Impressions later on. Also, he said that Jeff Probst, the host of Survivor, would be on, and Kid Rock.

Then, Jimmy Fallon said it was time for “Screen Grabs.” People sent in “screen grabs.” One was for “Semiautomatic Pistol Instruction and Tequila Tasting,” which Jimmy Fallon said was “an awful idea.” Another of them “was a ‘Capture’ thing you have to type in: GorillaHump.” He said someone was doing a Search for “pinata,” and the result was “Do you mean Jonathon?”

Yet another “Screen Grab” was of a lady’s daughter getting her photo taken with Jasmine and Aladdin. The lady said she thought that the guy who played Aladdin looked like Jimmy Fallon. Tonight Show announcer, Steve Higgins, came over to help Fallon dress up like Aladdin to compare them side-by-side, and they did look similar. Then, the Tonight Show went to a commercial break.

“Ladies and gentlemen, please welcome Christina Aguilera!” Jimmy Fallon said. He thanked her for helping to sing We Are the Champions during the Super Bowl Show episode of the Tonight Show.

They talked about their kids, and Fallon asked Christina if she noticed much of a difference between raising a girl and a boy. She said that her daughter “acted like a diva.” Fallon showed a photo of her son, Max, hanging from a rope. She said that he came home one day and wanted to do the “Hard Core,” sort of activity that involves a lot of jumping around.

Christina said that Max tried to teach her six month old daughter Minecraft. Fallon then said it was great to have her back on The Voice. He asked her if it was getting easier as she was on it. She said “It was like having two grown babies as well.” Jimmy Fallon challenged her to a game, and they played Wheel of Impressions after another commercial break.

When the Tonight Show came back from the break, Jimmy Fallon and Christina Aguilera played Wheel of Musical Impressions. They had to each take turns trying to impersonate a famous singer. They had a random musical impersonation generator. Aguilera had to sing like Cher singing a Folger’s commercial. She sounded exactly like Cher. Jimmy then had to sing like David Bowie singing Grand Old Flag. Jimmy Fallon also was AMAZING! 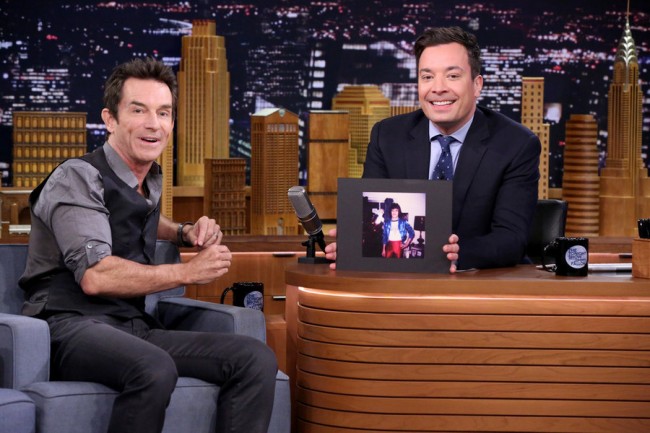 After another commercial break, Jimmy Fallon introduced his second guest, Jeff Probst, the host of Survivor. The Roots played the song I Will Survive. Jeff said he was through with doing practical jokes. He said he created an Adam Levine email account and texted David Groehl, saying stuff like “I got my tats based on yours,” and other things like that. Probst admitted that he had created the account to Groehl, because Groehl actually believed the account was real.

Jimmy Fallon showed some photos of Jeff Probst during his band days. He said he had been the lead singer. Probst told Fallon some of the names the band was called. He even sang a line “I can’t be stuck in love.”

“Survivor is back for its 30th season?” Fallon asked.

Jimmy Fallon said “I love you as a host. It’s fascinating seeing what people will do for money.”

Jeff Probst told Fallon that this season’s theme was “White Collars, Blue Collars and No Collars.” People from different walks of life would be grouped together and compete against each other. 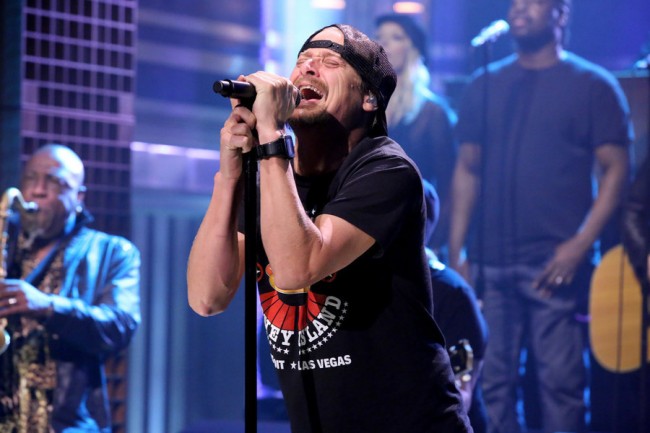 After a commercial break, Jimmy Fallon introduced the musical guest of the evening, Kid Rock. Kid Rock sang First Kiss from the album of the same name. He showed that he can still rock out with the best of them, and he WAILED on the song. It sounded like it will be a big hit for him.

The Tonight Show Starring Jimmy Fallon this Monday, February 23, was a terrific episode to start the week off with. Christina Aguilera talked about her return to The Voice and her children, and she played Wheel of Musical Impressions with Jimmy Fallon. Then, Jeff Probst talked with host Jimmy Fallon about his days as the lead singer of a rock band, and also about the upcoming season of Survivor. Kid Rock ended the show by — what else — rocking the place out, singing First Kiss.