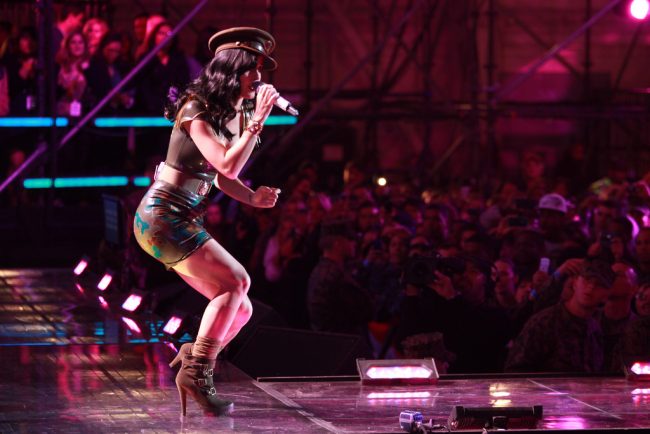 When Katy Perry was announced as the headliner for the Super Bowl halftime show entertainment, there were mixed reactions. Many of the woman’s fans were certainly excited, but there were many others wondering whether she could pull off the event. After all, big named stars have fallen flat in the past.

As usual, the details of the halftime show were left under wraps until the last moment. Perry announced in a press conference that lions and sharks would take the stage at the same time, but she never shared all her special guests or the tracks that she would sing. Only one thing was certain; Lenny Kravitz would make an appearance at some point. Some rumored that Rihanna and Missy Elliot would also appear. They were right with one of them.

Perry certainly pulled off a Super Bowl halftime show to remember. The Fireworks singer entered and left the stage in a way never seen before. The first moments were on the back of a large lion, as she sang Roar, while dressed in a dress with flames. It made it clear that much more was to come.

Like the Black Eyed Peas in 2011, the singer opted to use the whole stage with flashing and illuminate lights. Unlike the Black Eyed Peas, she pulled off the strange scenery and every moment of it looked as if it almost belonged for the songs that she sung. Perry certainly entertained during the Super Bowl halftime show.

The big issue were her guest stars. Kravitz was highly anticipated after hearing that he would join her on stage. He came on, guitar in hand, and started singing I Kissed a Girl, Perry’s first hit song. While it was great to see the two duet on stage, he was not on for long and it was not the big moment that many people expected. That could be because many expected it to be similar to Bruno Mars taking the stage with The Red Hot Chilli Peppers last year.

When Missy Elliot took the stage, the rapper did a couple of her own numbers instead of Perry’s. It led to many fans taking to Twitter to question the decision. If Missy Elliot could sing her own tracks, why not Kravitz? Some also questioned why Missy Elliot was on the stage for so long, but it was clearly mainly for the costume change so that Perry could sing her final song, Firework.

Some of the staging did not quite fit the song choice. Sharks and dancing surfboards appeared while she sang Teenage Dream. The performer clearly wanted to bring out some summer fun, but something did not quite fit. That does not mean it was not entertaining to see a couple of sharks dancing behind Perry.

The good thing is that all the performers sang live and sang well. There was no doubt that a good choice was made for Super Bowl XLIV (49)’s halftime show. Perry entertained all with her scenery change and songs on the Super Bowl halftime show, making many wonder what could possibly follow that next year.