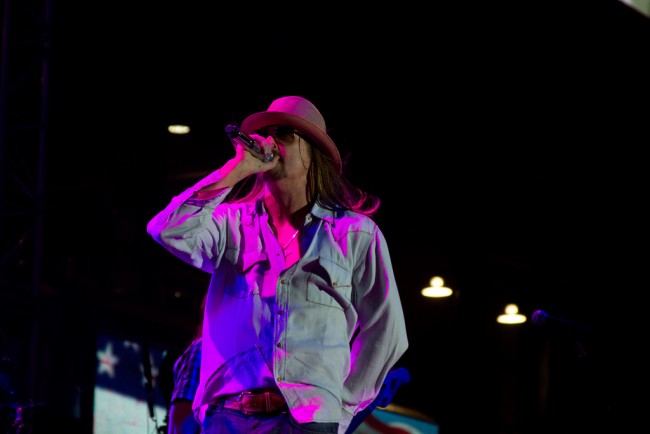 Kid Rock got stung by the barbed comments made by fans of Beyoncé, also known as the “Beyhive,” after his critical comments about her and her music in a recent interview conducted by a reporter from Rolling Stone. Kid Rock found that messing with the Queen Bey has its consequences, though doing so has helped keep his own name in the news. Whether or not his comments will lead to increased sales of his new album, First Kiss, and possibly help make his tour in support of it a big money-maker, is open to question.

Kid Rock, 44, whose real name is Robert James Ritchie, stated in the Rolling Stone interview that he did not know why Beyoncé, 33, was so famous. He also said he was not really sure why so many of her fans thought that she looked beautiful, because she has a big rear end. He said that he was looking at other attributes whenever he considered how attractive a woman was, like the size of her breasts.

The critical comments made by Kid Rock, published on Thursday, February 26, have evoked the wrath of many fans of Beyoncé. They have taken to social media to express their anger, like bees defending the hive and their Queen.

The majority of the interview was an in-depth look at Kid Rock’s career and his hits. However, when the subject of Beyoncé somehow came up, Kid Rock stated that he was “flabbergasted” by her success. Perhaps that was, in part, due to his being unfamiliar with her music.

Kid Rock mentioned that groups like Lynyrd Skynyrd, with hits like Free Bird and Sweet Home Alabama, and singers like Bob Seger, with hits such as Turn the Page and Old Time Rock & Roll, were examples of groups and singers who deserved to be called “famous.” Kid Rock also had a higher regard for Prince than Queen Bey, mentioning the song and album Purple Rain in the interview.

Apparently, Kid Rock does not consider huge hits by Beyoncé like Single Ladies, Irreplaceable and Drunk in Love, or the fact that her albums have sold millions of copies worldwide, to be enough examples to qualify her as being a famous singer. Oh, and there is also the fact that she has won 20 Grammys and has been nominated for 52, the most ever Grammy nominations for a female singer.

Kid Rock has hits of his own, like Only God Knows Why and Cowboy, and First Kiss will likely mark his eighth album on the Billboard 200 chart when it debuts next week. Still, he has not had the immense level of success that Beyoncé has managed to achieve so far during her career. Perhaps Kid Rock is a little bit jealous of the fame that Beyoncé has in comparison to himself, or maybe his tastes in music are so different that he has a difficult time understanding why Beyoncé is so popular.

Some of Queen Bey’s fans have posted bee emoticons and have criticized Kid Rock’s career. One member of the Beyhive tweeted that “Beyoncé is bigger than you and always will be.” There have even been some comments by Beyoncé’s fans wishing Kid Rock die a violent death.

Kid Rock probably further angered Queen Bey’s fans by then posting a photo of a can of insecticide at his Instagram account in response to their comments. He does not seem to be too concerned about the negative feedback he has received from Beyoncé’s fans.

Despite the negative comments that have been made by many of Queen Bey’s fans in response to the comments of Kid Rock, their “stings” have not seemed to hurt his ticket sales for his upcoming First Kiss Tour. Two more of his shows have been added to the Detroit, Michigan part of his tour where he will perform at the DTE Energy Music Theatre. It is generally not a good thing to anger a hive of bees; but, so far, Kid Rock has managed to turn the controversial situation to his advantage by keeping his name in the spotlight.