Obama was interviewed by NBC in his yearly pre-Super Bowl interview. and one of the subjects that he talks about it Football. He says that deflated footballs are not an issue in terms of football. Obama in the interview by NBC talks mostly about the game and the non-economic deflation problem.

Mr. Obama said that the New England Patriots would have won against the Indianapolis Colts regardless of the football’s appearance, in the AFC championship.

Mr. Obama said that most people do not realize, including himself at one point, that each team prepares and brings their own footballs. For the avoidance of the deflate-gate controversy, Mr. Obama says that the NFL needs to figure out how the officials of the games will be in charge of the footballs from beginning to end.

The alleged deflation of the footballs has not been proven but it is said that it is easier to grip the ball. The Patriots have been accused of things like this before such as putting helium into the ball to increase the distance it will go, and recording other teams plays. 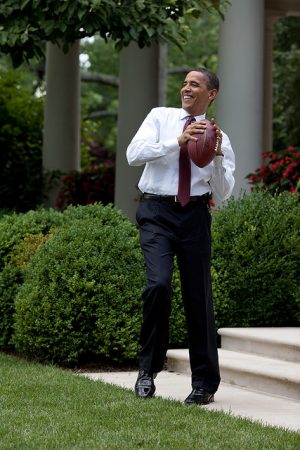 Mr. Obama added that if breaking the rules is breaking the rules. The president’s home team is the Chicago Bears, but they did not make the cut this year. When asked if he were rooting for the Seattle Seahawks or the New England Patriots he picked neither because picking one would just “alienate” the other.

The president denied doing an end zone dance after Democrats had lost their seats in the midterm election. The president has been in office for six years, and in all that time he says he has learned that Republicans initially disagree with some eventually agree, just not as soon as he would like.

The president says that with the two years he has left in office, he wants to look back and know the to the American people are recovering from the the crisis. He also wants there to be a better “foundation” for the future.

Obama was asked if he like chips and guacamole or wings, he responded with chips and guacamole and he likes basketball over football. The final either-or question was who would win in an election Joe Biden or Hilary Clinton, to which he did not pick, just said that he loves them both but “good try.”

If Obama were to pick geographically, then he would pick New England, because it is closer than Seattle to Chicago. His team preference is also leaning towards the Patriots because he said they would win against the Colts, a previous game, with or without the alleged deflation that Obama talked about.

Photo by The White House – License