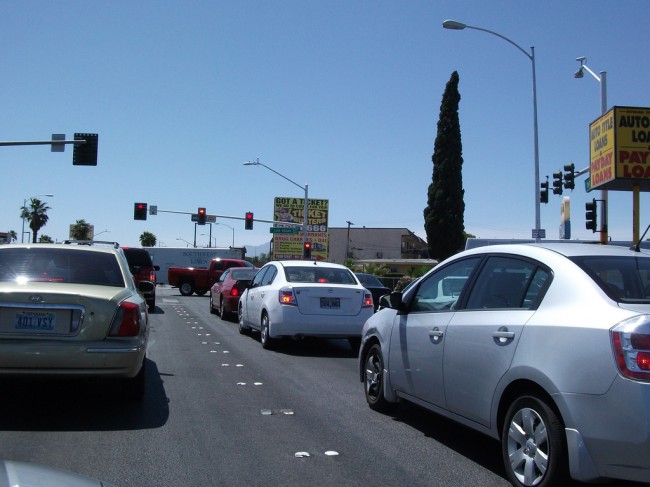 A Las Vegas woman was teaching her teenage daughter how to drive. Soon after, an incident of road rage tragically left the mother dead. She was shot in the head outside of her home on Thursday and was put on life support until Saturday when she passed away. The woman’s name was Tammy Myers. She was a 44-year-old nurse who had four children.

On the drive from a nearby junior high school to their home, Myers and her daughter were involved in an incident with another vehicle. It is unclear whether or not this was a collision, but the Myers’ Buick has some minor damage on the passenger side. Different reports on who was actually driving at the time, the mother or the daughter, have been released. There may also have been a verbal altercation with the men in the other car before the road rage incident.

Myers apparently let her daughter practice driving in the school’s parking lot. After they left the parking lot one report claims that a sedan passed them and then slammed on its brakes. The girl steered around the car and drove her and her mother to their home. Another report says the incident was a near collision and that the mother was driving.

The vehicle involved in the road rage incident was a four door silver sedan according to security camera footage that was released on Saturday night. The three men inside the sedan followed Myers’ vehicle to her house. The teenage daughter went into the house before the men started shooting and she did not witness what happened outside. However, there, in front of the home, the men opened fire on Myers’ car.

Myers’ son who was inside the house ran out and fired his own weapon back at the men. He believes at least one of his rounds hit the car as it fled. Unfortunately, this horrendous act of what is being called road rage left his mother on life support and later dead. During an interview with ABC news, 23-year-old Matt Myers, the son who returned gun fire, called the shooters “really disgusting” for taking the life of his mother.

Bob Myers, who is 49, was in California on business when the shooting occurred, so he did not directly witness the tragedy. He choked up over the loss of his wife. He said “she was a good woman” and express how much she often helped other people. Myers’ husband implores the suspects to turn themselves in and additionally asks anyone who may have any information to go immediately to the police.

Lieutenant Patricia Spencer, who works at the Las Vegas Metropolitan Police Department, reported that the men who were involved in the road rage were strangers to the Myers family. Myers’ husband also stated that crime is high where he lives and that he does not feel safe.

The family promises that they are looking for Myers’ killers. Police are also searching for the men and their vehicle. However, the assailants’ identity are still unknown. Police do have a composite sketch of a man whom they believe is one of the suspects. He is described as being about 25 years old, white, 180 pounds, and roughly six feet tall. He is also said to have dark blonde hair and blue or hazel eyes. Police have released this sketch to the public along with pictures of the suspects’ car.

It is terrible news for Myers’ friends and relatives to hear that the result of this act of road rage has left the woman and mother dead. Her family is both mourning their loss and waiting for justice.