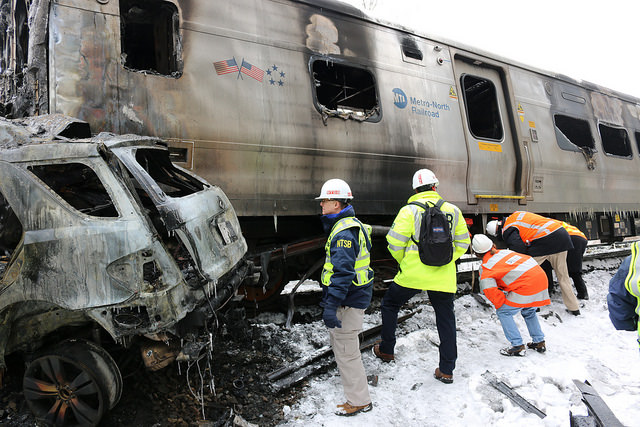 Schumer wants improvements at railroad crossings nationwide after the horrific MetroNorth train crash that killed six individuals.  New York’s Democratic Representative Charles Schumer along with Connecticut’s Senator Richard Blumenthal proposed a bill to add lights and signals at train crossings, not only in New York, but for the entire United States, wherever they do not already exist. Schumer asserts that the Federal Government should conduct both engineering and safety checks at all railroad crossings suggests that new lights and signals be installed at all crossings that may be prone to accidents.

Although the federal investigation is still pending, the rail guard clearly played a role in the number of fatalities for the MetroNorth that crashed in Valhalla, New York. On February 3rd, an SUV driven by Ellen Brody stopped on the train tracks when a rail guard landed on top of her car. She got out of the car inspected her vehicle, although a train was barreling towards her, blaring its horn. She inexplicably ignored the warning sound of a coming train, got back into her vehicle, and was hit when the train entered the crossing. Five people on the train also perished in the accident.  Both the lights and the gate at the Valhalla crossing functioned properly before the explosive crash. Investigators wonder if Brody experienced driver panic as she saw the train coming towards her.

Schumer wants improvements at railway crossings and also calls for education and public awareness campaigns to alert the public to the dangers of railroad crossings. Schumer believes that, with proper education, drivers will know what to do in the case of an emergency. Experts say Brody should have floored it, smashing through the gates at the crossing. Alternatively, they say she could have abandoned the car, without giving it a second thought. Brody showed no sense of urgency, according to a witness behind her vehicle who saw everything. Brody likely panicked when she found her car stuck on the rails and a train heading towards her. Her husband, Alan, thinks that she may have gotten confused because she was driving at night and was in an unfamiliar area. The education and preparation being proposed by Schumer may ensure that, in the future, individuals are more prepared for that time of situation and fatality can be avoided.

After a MetroNorth commuter train derailed in December and killed four passengers because a conductor fell asleep behind the wheel, Chuck Schumer suggested that both MetroNorth and Long Island Railroad conductors be tested for sleep apnea. In the aftermath, the Metro Transit Authority, the transportation branch that governs bus, rail and subway service in New York, screened more than 400 conductors for the disorder.

A federal probe backs up Schumer’s claims. Before this most recent disaster and after the crash caused by the conductor with sleep apnea, a federal review revealed that MetroNorth, the nation’s second largest railroad system for commuters, was sorely lacking in several areas. With both Schumer and Blumenthal present, the report revealed that while pushing for trains to be on-time, the commuter line became lax on inspections, provided poor training for its employees, and became casual with employee cell phone usage on the job.  After the reviewing the report, the Federal Government ordered the agency to “prioritize safety above all else.” Schumer wants improvements at railway crossings and New Yorkers want that too. If Schumer’s railroad crossing improvements are initiated nationwide, it holds the potential for saving lives across the country.