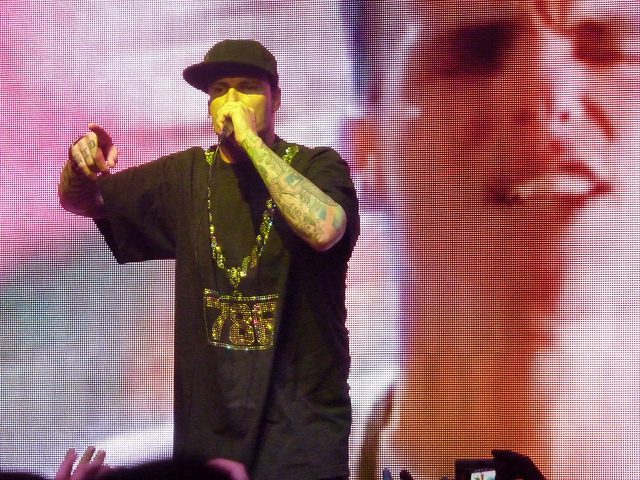 Vanilla Ice went on Good Morning America to promote his fifth season of The Vanilla Ice Project. However, host Lara Spencer wanted him to explain his arrest for burglary. Each time the morning host asked about his arrest last week for burglarizing a house next door to one that he was renovating, he responded that it was a “mess”, that he was dealing with and that everything surrounding it was blow out of proportion.

Vanilla Ice, nee, Robert Van Winkle, admitted that the house that he burglarized was in foreclosure and that he did take some items, including some found on the curb, that he thought were trash. Among those items were a pool heater, a bicycle, and other furniture items. He claims that he was going to purchase the house. He also tellingly admitted that he lied about having previously purchased the home. In fact, the home’s previous owner filed burglary charges against Van Winkle because their property was found at his house. Despite Spenser’s pressing about the house burglary on several different occasions, Vanilla Ice only minimally explained his arrest.

According to a police report, Van Winkle says that he was going to purchase the home although he had no contract or even down payment on the Florida property. Ice does own a home in the area near one that he was rehabbing for the show. A foreman for his show claims that Van Winkle ordered him to take the stolen items from the property and to his home in Lake Worth, Florida.

Although Vanilla Ice made his mark as a rapper, reality television has been Van Winkle’s bread and butter lately. He started off as a championship motorcross biker, but an injury stalled that career. He practiced beat boxing and breakdancing while his injury healed. After wowing the crowds at an open mic , he performed regularly on stage. The Vanilla Ice Posse was born and Van Winkle opened for groups such as M.C. Hammer and Public Enemy. Hit songs Play the Funky Music White Boy and the eponymous Ice, Ice Baby followed.

After his rap career faded, he moved onto the movies, playing himself in Teenage Mutant Ninja Turtles and The New Guy. He felt comfortable doing 2004’s The Surreal Life because he was able to play himself and everyone accepted him. In 2009, Ice worked on the Vanilla Ice Project for the DIY Channel. On the show, he renovated a house in Palm Beach, Florida, focusing on one room each week. He also went Amish with a show where he spent time in Amish country rehabbing houses without the use of modern tools. A book on remodeling followed.

Vanilla Ice Project-The Real Estate Guide is a free ebook available for download that teaches people how to succeed in real estate. While promoting his fifth season of The Vanilla Ice Project, Van Winkle mentioned another project. Palm Beach Mansion Flip follows Vanilla Ice as he revamps an 8,000 square foot mansion in Palm Beach, likely not far from where he was arrested.