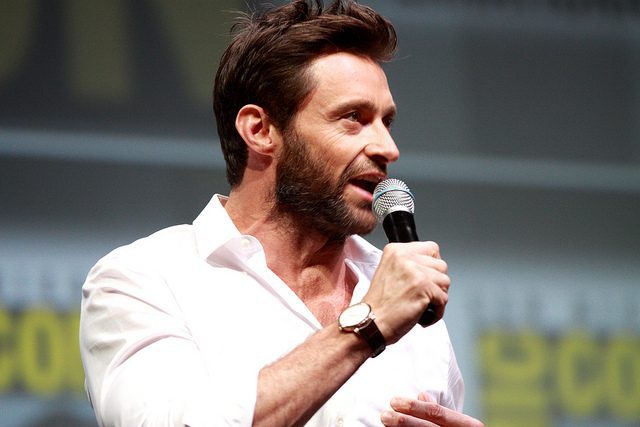 In the third original picture by Director Neil Blomkamp, Chappie is a story about the government’s own system and technology pairing with the common man to rebel against corruption and the government’s dastardly deeds. The title character (voiced by Sharlto Copley) is an example of what would happen if an artificial intelligence was born into a machine, and a child’s essence given unto a strong robotic body.

Eventually, the child’s essence grows up pretty fast upon seeing the actions and killings made by the government and authorities against its own people. Co-starring Hugh Jackman as the main antagonist, his character Vincent Moore had been set up by the government to create a robotic soldier to be used by the police, and chose to go the route of a human controlled (through a headset and various sensors controlled by Moore) military grade mechanized robot which looks eerily similar to a murderous classic mech pototype from the 1987 film Robocop. One can tell from the get-go that the coolest battle of the film will end up being between Moore’s headset controlled Mech suit and the focus of this film, the smaller but just as deadly Chappie. Despite the breathtaking action sequences, the true fun of this film is watching Chappie grow, learn, and develop into an awesome machine for justice as well as steadfastly protecting friends and family.

The movie starts out in 2016, with the first wave of automated police robots (called Scouts) who are more than proficient in the art of war, and patrol the streets with human police. At first, the company who developed the Scout series of police was incredibly impressed with their effectiveness; although, one of the heads of the company (Vincent Moore, played by Hugh Jackman) never trusted the idea of robots that could think for themselves. Vincent Moore had a contract to sell his robotic mech suit, but upon seeing the Scout series in action his contract was terminated in favor of the more agile, pre-programmed robotic assault troops. Vincent tries to raise warning of the dangers regarding having a self-aware robotic entity, pleading others to realize that a machine capable of making its own morally critical decisions can be dangerous to the human race as a whole.

The general public (many of them considered to be criminals), along with Scout series creator Deon Wilson, realize the government is going too far in its persecution of the human race. Deon feels he can do better than the Scout series, by way of creating programming that will allow robots to think, feel, and act for themselves without being given orders or directions. The CEO of the Scout series’ manufacturing company (Michelle Bradley, played by Sigourney Weaver) refuses to let Wilson achieve his dream, but via a stroke of brilliance Deon steals an incapacitated police droid and re-programs it to be the first robot with true artificial intelligence. This robot’s name is Chappie. The resistance is then formed, to fight back against the oppressive institution that the government has become, with Chappie as its leader.

Chappie starts out with the mind and sense of wonder of an infant, and through the course of the film one watches as Chappie comes to understand the state of the world (as well as the human condition.) This is namely regarding how humans are controlled by their emotions, and therefore allow this to cloud their sense of right and wrong. Once Jackman’s character Vincent sees Chappie in action, he reports to his boss (Bradley) who gives the order to destroy Chappie by any means necessary. Vincent then arms himself with the mech suit he was contracted to design, build, and pilot to do battle with our main protagonist Chappie.

Chappie and Jackman’s monstrous mech suit do battle in a very entertaining fashion, along with multiple gangs of humans in a free for all gunfight/brawl. Chappie prevails in the end, but at what cost? One would assume that with the power of Wilson’s artificial intelligence (located within Chappie) having been proven to be more than capable of slaughtering its enemies, Chappie must be destroyed and another like him shall never be produced. The ending will not be spoiled in this review, but it is as good as Director Neill Blomkamp’s first two films, District 9 and Elysium.

The part of Chappie (or at least the voice) is played by Sharlto Copley, an excellent actor. His performance as the robot Chappie, who came to terms with the state of the world while trying to help fix it, was by far the best in the picture.

With the film Chappie, Blomkamp has said he feels his approach towards a dystopian future (set among poverty and corruption) may have come to an end for a time, at least until District 10 comes along in his future writing/directing endeavors. All in all, Chappie was an entertaining film, but never tackles some of the philosophical and moral questions and dangers surrounding an artificial being like Chappie existing. Like in the Terminator series, the first time someone creates such an artificial entity it is exciting and wonderful; but what may happen if that intelligence continues to be produced and decides that the human race must be destroyed.

Because these possibilities are never addressed as a concern not only for the villains but for the common man as well, I rate this movie with a hard fought six out of ten. It is good enough to watch once it comes out on DVD, but for those who do nott get to the theaters very often,  The Avengers: Age of Ultron opening in May addresses the very real possibility of artificially intelligent beings like Chappie deciding to make war with the human race. Save your movie theater money for upcoming summer blockbusters like the Avengers’ sequel or the brilliant reboot of a classic action film being called Mad Max: Fury Road; these promise to be the considerably better films.

One Response to "Chappie (Movie Review)"