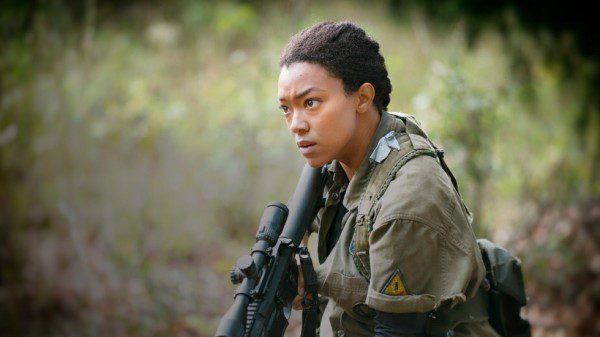 On The Walking Dead episode Forget, Sheriff Rick and his band of survivors were attempting to settle down and make a go of life behind the gates of the Alexandria Free Zone community that Aaron and his friend, Eric, had invited them to become members of. They each had to be interviewed and recorded by the leader of the community, Deanna Monroe. She gave them each jobs, making Rick and Michonne constables, but Rick, Carol, and Daryl still have doubts about the true nature of the community they have settled down in on The Walking Dead. Rick said “If they can’t make it, then we’ll just take this place.”

The Walking Dead began with Sasha looking at photos on the wall of the house she had chosen to live in, perhaps wondering about the lives of the people who used to live there. She looked somewhat creeped out to be living in the house that other people used to live in.

Then, on The Walking Dead, a woman, Olivia, showed Sasha the guns in the armory. Sasha selected one to use and she took it out to practice her target shooting skills. She shot at the photos that had been on the walls of the house. She kept looking behind her, as she shot one after the other of the photos. “Come and get me,” she said. Then, The Walking Dead went to the first commercial break of the show.

After the break on The Walking Dead, Constable Rick, Carol, and Daryl were meeting together, and talking about taking the guns from the armory. Rick said that the people had been lucky, and now were luckier yet.

A couple of walkers showed up, and Carol emptied her gun into one before finishing it off. The walker had a “W” carved into its forehead.

After that, Rick and Michonne wondered about why they had been made constables, when they were basically strangers and new to the community. Michonne said that maybe it was a way to get rid of them. Other community members would see that they were made authority figures and that might put a target on their backs if they were resented..

Daryl said “Come out, now!” Aaron came out and asked Daryl if he knew the difference between friends and walkers or enemies. Daryl told him he could come with him, if he was quiet.

Deanna talked with Michonne, saying she wanted a community with a real police force there. “Does that sound like pie in the sky?” Deanna asked.

On The Walking Dead, Rick told her he wanted to talk about there being “real security.”

“I know you want everyone to be armed inside of the walls,” Deanna said.

Rick told her on The Walking Dead that, if other things are done, there might not be a need for that. Rick wanted there to be a lookout posted in a tower there 24/7. Deanna said she would consider having Sasha be a lookout, but she wanted “something in return.” She wanted them all to be at a meal welcoming them into the community. The Walking Dead went to another commercial break.

When The Walking Dead returned from the commercial break, Daryl and Aaron saw a horse. “I wanted to catch Buttons for some time now. One of the kids saw him and named him Buttons. Every time I get close, he’d get spooked and run away.”

On The Walking Dead, Daryl approached the horse and told it “Good boy. You used to belong to somebody, didn’t you?” But then, walkers showed up and spooked the horse, and Aaron and Daryl killed them, but Buttons ran off.

Back on The Walking Dead at the community, Olivia and Carol talked about making a chocolate cake. A man, Tom, asked Carol if she had used guns before. She said she had, but did not have much experience using them. Tom offered to help her sometime.

Aaron tried to convince Daryl on The Walking Dead to go to the cocktail party. “Let them get to know you. Go to Deanna’s party tonight.”

Daryl told him “I ain’t got nothing to prove,” but he did not say he would not be there.

On The Walking Dead, Deanna welcomed everyone to the party that night. “I envy her,” she said about baby Judith.

Rick asked “Why?” and Deanna said she would get to grow up in a real community. Rick was introduced to Deanna’s husband and they had wine together.

Meanwhile on The Walking Dead, Daryl and Aaron were still outside, killing more walkers. Aaron fell and a walker almost got him, until Daryl smashed the walker’s head in with his booted foot. Buttons showed up, and was swarmed by walkers, who took the poor horse down and ate it.

“You were trying to help,” Daryl said.

At the cocktail party on The Walking Dead, Glenn asked Noah if he was alright. Noah said that he was, but he wanted to leave soon. Glenn told him, “No, you’re not bailing, man.”

Outside Aaron and Eric’s house on The Walking Dead, Daryl asked Aaron about the party. “Why didn’t you go?” Daryl asked.

Aaron told him he had just suggested that Daryl go, but he wanted to spend time with Eric who was still recovering from his sprained ankle. They were having spaghetti. He invited Daryl in.

Then, on The Walking Dead, back at the party, Jessie, who had cut Daryl’s hair, said “Ordinary life, just like before.” Then, she said “Well, not like before.”

On The Walking Dead, Jessie continued her conversation with Rick. “They’re all from totally different backgrounds. They would have never met. Now, they are a part of each other’s lives. They are each other’s lives,” she said.

“Yeah, that’s a pretty good deal,” Rick said on The Walking Dead. One of Jessie’s boys, Sam, ran up and asked if there were more cookies around. He said about Rick, “He doesn’t have a stamp.”

“Do you want a stamp?” Sam asked Rick. Rick said sure, so Sam stamped his hand with a red symbol, and Jessie said “Now, you’re one of us.” The Walking Dead went to yet another commercial break.

At the return of The Walking Dead, Sashsa was welcomed by Spenser, who said “Deanna’s my mom.”

Sasha said “Excuse me,” and left.

Daryl enjoyed spaghetti at Aaron and Eric’s house on The Walking Dead. “If you see a pasta maker out there, get one for us,” Eric asked Daryl. He said some lady there wanted one, and she “wouldn’t shut up about it.”

“Ask him what?” Daryl said.

In the garage of their house on The Walking Dead, there were a bunch of motorcycle parts. “You’re gonna need a bike,” Aaron said.

“I asked Deanna not to give you a job. I want you to be another one of Alexandria’s recruiters.” Aaron asked him.

“The main reason I wanted you to recruit,” Aaron explained on The Walking Dead, “is that you do know the difference between a good person and a bad person.”

“I ain’t got nothing else to do,” Daryl said.

Then, at the armory, in the dark on The Walking Dead, Carol put some guns in a sack. Sam was behind her, and said “What are you doing?”

“I followed you. I wanted you to make me a batch of cookies,” Sam said.

On The Walking Dead, Carol told Sam “You can never tell anyone, especially your mom.”

He asked her why, and she told him that one day he would wake up and be tied to a tree, and no one would be there to hear him scream. Monsters would come to tear him apart while he was still alive. “Or, you can tell no one, and get lots of cookies. I think I know what you should do,” she said.

At the party on The Walking Dead, Jessie held baby Judith. Rick told her “She and Carl — that’s why I’m still here.”

“Do you want to take her?” she asked.

“Yeah,” he replied. They looked like they had some chemistry between them, but Rick knows she is a married woman. He did kiss her on her cheek, though, and they locked eyes with each other.

At the return of The Walking Dead after another commercial break, Deanna met with Sasha by the gates in the morning. Deanna asked her what this was all about, and Sasha told her “This — it isn’t real.”

Daryl met with Rick and Carol outside of the gates on The Walking Dead, and asked them about the guns that Carol had taken. “I’ve been thinking. Do we really need these?” They looked at him quizzically. “You wanted me to try, right? Well then, good,” he said.

Inside the community on The Walking Dead, Jessie waved and said “Hi, Rick,” but she was walking with her husband. Rick looked like he was about to go for his gun. Some upbeat 1960s-style pop music played, and Rick ran over to a part of the fence and he looked like he was listening to something. There was a walker on the other side of the fence.

That was the end of The Walking Dead episode, Forget. It was another episode without really all that much action in it, other than the shooting of the walkers by Daryl and Aaron, and the horse getting swarmed by the walkers and eaten. Carol’s threat to Jessie’s son, Sam, was kind of cool, though it also brought out the extent that Carol might go to in order to keep herself and her friends alive and safe. Daryl thinking about the idea of becoming a recruiter for Alexandria was also an interesting scene. He seems to be getting more confident that the community is not that bad.