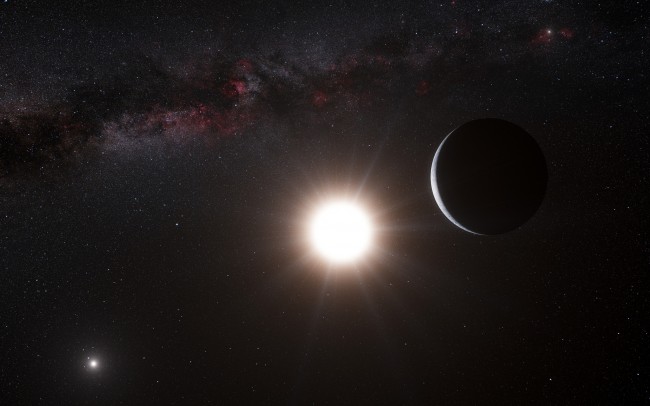 Astronomers have recently discovered a massive exo-planet in a planetary system that rears four suns, just 125 light-years from Earth. The yet to be named exo-planet is over 10 times the size of Jupiter, the largest planet in the Solar System. Though, scientists believe the exo-planet most likely does not have an actual surface to stand on – just like Jupiter, which is a gas giant. According to those who discovered the exo-planet in the four-sun system, if they were able to send out a spacecraft into the upper atmosphere, they would see one initial sun, a luminous red dot in the sky, and a second star which shines even brighter than Venus does in Earth’s night sky.

If a telescope was to be used while on the exo-planet, the small-scale star would be seen to be the second of a binary system. However, this system yields two additional stars. An astronomer at the Jet Propulsion Laboratory, Lewis Roberts, stated seeing these stars would depend upon what kind of sky that would be present, though the chances are that at least one of the host stars would be able to be viewed at any point in time.

Astronomers discovered the four-sun system, known as 30 Ari, a few years ago, but until recent they believed their observations concluded that the system was composed of three stars which were orbited by one exo-planet. The fourth star in the system was revealed following additional telescopes, with a Robo-AO adaptive optics system, being used at the Palomar Observatory in San Diego, California.

Adaptive optics allowed scientists to use the ground-based telescopes to “see” better by taking out the effects of the atmosphere that create an altered vision which makes the stars look like they are twinkling, due to atmospheric perturbations. Roberts said scientists now have the ability to analyze faint stars than were previously undetected.

Roberts and his team published their findings in the Astronomical Journal. They described 30 Ari as a double binary star system. The team explained the exo-planet orbits around the main host star, known as 30 Ari. Scientists say they have split up the four-star system into Ari A and Ari B.

Around 1,670 astronomical units beyond Ari B, lies Ari A. Both binary systems orbit around a central mass that is located in between them. Roberts said that one other quadruple star system as been discovered, with one exo-planet. Though, he claims even more systems like Ari A and Ari B may soon be detected. “There are other known quadruple systems – there are even known quintuple systems,” he said. “As we find more and more exo-planets, we’ll probably find some of them in systems like these,” he claimed.

Previous observations of systems like these have suggested that stars may influence the orbit and even the size and mass of nearby exo-planets. Thus, these new findings may provide insight and new information about how this stellar phenomenon would differ in star systems containing two, three, and four stars. The researchers do not believe the newly-discovered star, 30 Ari, has had a major influence on the orbit of the nearby exo-planet, and in the coming years they hope to find out why this alteration did not happen.