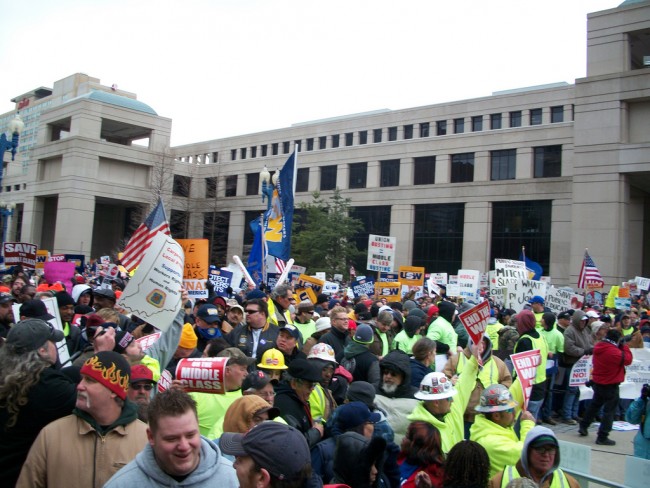 Soon after the Indiana religious freedom law passed, activists induced a boycott due to the law allowing discrimination against gays. In downtown Indianapolis, thousands of protestors picketed the streets, heading towards the statehouse to protest their disagreement with Republican Governor Mike Pence, who signed the legislation. Police sources estimated an amount of 3,000 people protesting in the rally. Activists that organized the boycott encouraged participants to vote in order to get their voices heard in the future.

The Religious Freedom Restoration Act Pence signed, stirred anger within many people. They believe the bill could lead to discrimination from business owners who choose not to serve gays. Although similar bills have been passed through the rest of the country the act gives Indiana a bad reputation, which may potentially keep future talent away from the state.

Indiana’s Religious Freedom Law has also induced a boycott with business owners, mayors, and celebrities, who have expressed their thoughts and comments about the signing on Twitter. Seattle Mayor Ed Murray has claimed to stop city-funding work-travel due to the signing. While San Francisco Mayor Edward M. Lee is stopping city-funded trips since the legislation is a form of discrimination.

Pence denies the law discriminates against gays, and says it protects business owners from the government forcing them to practice their religion. He tells sources the law is created to protect churches, christian businesses, and individuals from those that want to punish them because of their beliefs. From Pence’s statements to BBC, the law seems to have the opposite effect of what the protesters are arguing for.

The law can hurt Indiana a lot in the long run, it is stopping talent and prospective workers and businesses to want to associate with companies within the state. Although Pence is trying to protect the church, he should have addressed all issues the law would stir from the inside and outside of his office. His supporters see no harm in the law because it is made to protect the church from being discriminated on, but it does not protect those that are not following the religion.

To avoid the boycott from stirring after the signing of the Indiana religious freedom law, the governor should have thought about the churches discriminating against those that do not follow the religion. The people are upset because the law is one-sided. If everyone was taken into account during the process of signing the law, nobody would be upset.

Although the damage is now done, Indiana has to come up with a plan that will make everyone feel as if they are welcomed. Pence’s decision has little support. Vetoing or creating a new law that shares the same protection, for those that are not in the church, from the church will eliminate the withdrawals of city-funded and work-related trips.

The Indiana religious freedom law inducing a boycott has many people questioning their rights as citizens. In a modern society such as today, the law should have been written to protect everyone, and not a small group of people. Pence may have signed with good intentions, but it is obvious the law was created for one group of people.