Israel, the U.S., and Iran: What No One Knows 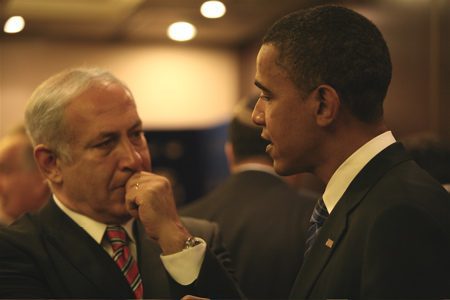 President Obama is refusing to meet with the Prime Minister because it is so close to the Israeli elections. Netanyahu is using his speeches to Congress for domestic political purposes. Netanyahu believes that this mission is historic, that he is to speak for all Israelis, the entire Jewish people. His coalition election is March 17.

Sunday was the American Israel Public Affairs Committee’s (AIPAC) annual policy conference in Washington, D.C. The well-known controversy made people uncomfortable and cast a dark cloud over the conference. According to most political experts, the bipartisan organization found itself unable reach an agreement. Do they send lawmakers to the speeches being conducted by the American Israel Public Affairs Committee, or remain with the key plan of Congress learning about the Iran negotiations from Israel’s Prime Minister Netanyahu.

AIPAC CEO Howard Kohr stated that everyone there should care about the U.S.-Israel relationship, but they wanted to talk about the Iran deal. It had taken hours to lobby for Congress to attend the speech.

John Boehner told reporters that the “only conflict is between the White House and Israel.” Democratic Senator Ben Cardin thought he would defer the message by saying there were circumstances around the Prime Minister’s invitation that were not ideal. He encouraged Congress, however, to focus on Iran as the “bad guy.”

The Obama administration is not interested in talking about the Iran deal. The belief is that the administration already has a plan in place. Secretary of State, John Kerry, is in Geneva to tell the U.N. about defending Israel. The U.N. says Washington is biased toward the Jewish state. The disagreement over an Iran nuclear deal was already being addressed. Talks and speeches have been planned this week to explain the deal, and details about the protection of Israel. Kerry was supposed to speak to the U.N. Human Rights Council on Monday to move for unfair treatment of Israel and require a more balanced approach.

Kerry said Sunday that the United States is committed to defending Israel, even though there is the Iran disagreement. The administration has already made provisions to protect Israel from any condemnation from the United Nations and other international forums over the years.

Prime Minister Benjamin Netanyahu has not been heard. He believes there is information the United States should know before making a nuclear deal with Iran. He also says there are compromises being made that are against Israeli interests. Congress may not be aware there are many pieces to this deal and he wants to lay the details out before the lawmakers in the U.S. make any decisions.

John Kerry believes that if anyone is against the deal, then they do not know the deal. It is not clear how Israel even knew about the talks between Iran and the U.S., UK, Russia, China, France and Germany. According to the Prime Minister, the Iran deal will give them the capabilities to make a nuclear weapon, should it choose to. Also any arrangements made would not be referred to as an agreement or treaty to avoid taking the arrangement to Congress for ratification. The Prime Minister will encourage Congress to make new sanctions against Iran, regardless of President Obama’s promise to veto this legislation to prevent, or stall talks with Iran.

Obama says the Iran talks will happen. In order to derail any and all thinking that there is a chink in the U.S. – Israeli relationship, the White House published on its website, a report, detailing the “Five things you need to know about the US-Israel relationship under President Obama.” The 700 word article was posted on the White House website.