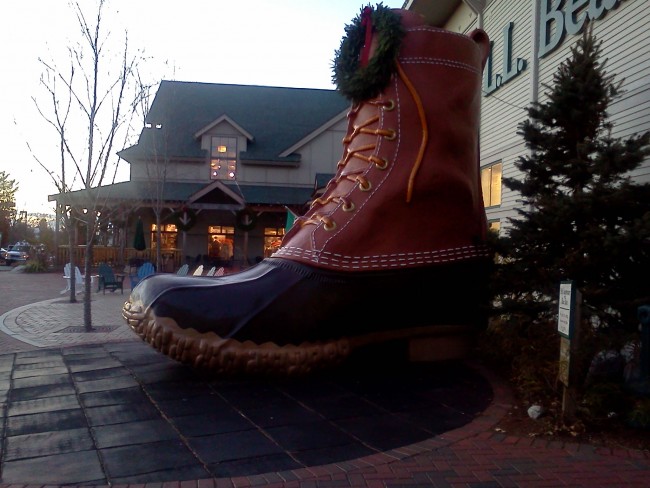 The Maine-based retailer, LL Bean is going to pay its 5,300 employees five percent bonuses because it made a higher revenue last year. That will give full-time employees a bonus of $1,500 to $2,000. Part of that success is credited to a long, rough, cold winter creating more of a need for warmer clothing and winter boots. LL Bean does not state how much it pays its hourly workers, however, according to posts of employee reviews, hourly employees average $10 to $11 an hour.  LL Bean also announced its plan to quadruple the number of retail stores over the next five years. This plan will double the number of employees. Last year, the retailer expanded into three new markets building retail stores in Colorado, Minnesota and Vermont. LL Bean is hoping to expand beyond Colorado, but no one is saying where at this time.

The Freeport, Maine company sold its first pair of boots over 100 years ago. The company was founded by Leon Leonwood Bean in 1912. A cobbler, who stitched uppers onto rubber boots, in hopes this would help to keep his feet dry on hunting trips. It worked. Bean found other hunters and made flyers for what he then called the “Maine Hunting Shoe” and thus began the one-man catalog business. In 1937, sales hit $1 million.

The farther away from New England people are, the less understanding that people have of the LL Bean brand. More stores may mean a new generation of dedicated shoppers. LL Bean sells active apparel, outdoor equipment and casual clothing and many other items for the casual to the intense outdoors man.

LL Bean is creating an “omni-channel” strategy, offering customers the option to shop online, by phone and catalog, or in-store, expanding the LL Bean experience. Each store will offer the traditional LL Bean Outdoor Discovery school excursions. More expansion locations will be announced later in 2015. CEO Chris McCormick sent out a memo Wednesday, stating his goal was 100 stores by 2020. McCormick has the approval of corporate leadership, as well as the board of directors. McCormick also announced that he will be retiring in 2016. The search for a successor has already begun.

LL Bean already has 26 retail stores in 12 states other than Maine. Four more stores will be opening sometime in 2015. Expanding to 100 stores by the year 2020, putting into each store 80 to 130 full-time and part-time employees, which will more than double the company’s employees nationwide. The store also has 10 outlet stores. However, the expansion will only be for full-price retail stores. The time to grow in brick and mortar stores is now, as many other retailers are closing, so real estate is easy to find.

This would also be a boost for Maine employment. LL Bean’s boots are made in Brunswick and Lewiston, Maine. There are other divisions in Maine that would expand with store growth. However, some divisions will downsize, such as some call centers that take catalog orders and handle long-distance customer service. The Bangor, Maine call center will close in 2016 due to more people opting to shop online. While some LL Bean divisions may be downsizing, by 2020 the company hopes to have expanded to 100 stores in operation.