Milky Way Galaxy Shows Remnants of Dust From Long Ago 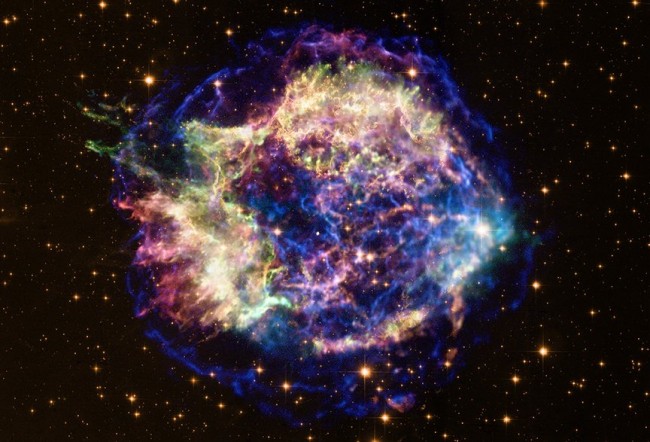 A cloud of dust has been discovered in the center of the Milky Way Galaxy, the dust from which the stars in the Milky Way were born. According to scientists, the formation of the cloud was most likely the result of a massive supernova that occurred long ago.

Located near center of the Milky Way Galaxy, Sagittarius A, a dusty remnant of a supernova, was created during a violent stellar eruption over 10,000 years ago. As mankind was drifting about the Earth in search of sustenance and shelter, the supernova would have been able to be viewed even during the day.

Astronomers stated they viewed the stellar cloud of dust by utilizing the Faint Object Infrared Camera Telescope (Forcast) carried above the farthest reaches of Earth’s troposphere by a NASA-designed Boeing 747, dubbed the Stratospheric Observatory for Infrared Astronomy (Sofia.) This aircraft is the largest airborne observatory in the world. Being so high in the Earth’s atmosphere, astronomers are able to see into the depths of the Milky Way Galaxy, as no pollution perturbs the telescopic images. As well, there are no ground-based telescopes that can observe minute details at such a far distance in infrared light, since the wavelengths of electromagnetic radiation are inhibited by water vapor in the atmosphere.

Carl Sagan, the once world-renowned astrophysicist and host of Cosmos in the 1980s, once stated that all humans, both present and past, are all made of “star stuff.” Almost all of the elements on the periodic table that created planets, stellar bodies, and carbon-based life, were first forged from the stars in the Milky Way Galaxy. These building blocks of life were then spread throughout the cosmos, creating life on other worlds, caused by remnants from a star’s death long ago.

Ryan Lau, an astronomer from Cornell University, explained stellar dust is a very important factor to the Milky Way Galaxy and all other collections of galaxies in the Universe. He said the answer astronomers are trying to find is where the stardust that formed planets, asteroids, and life on Earth came from.

Dust has been observed in many galaxies, the Milky Way being one of them. It has been recorded in galaxies as they were billions of years ago, before the birth of the Earth itself. This new study suggests that the explosive deaths of supernovae are the most probable origin of the clouds of dust. An additional theory states that dust was formed by the ascension of heavy elements from the core of stars previous to them being blown outwards in a supernova. Though, this process was hypothesized to be too delayed to account for observations seen in galaxies formed at an earlier time. “Finding this surviving dust is surprising to me because when I think of a supernova, I imagine a very harsh, violent environment that is very inhospitable to dust and other things that happen to be caught in the explosion,” said Lau.

Super massive stars have a very short life on the cosmic timeline, and when these leviathans burst forth, they eject heavy elements like iron, lead, and carbon out into space, where atoms combine to form stardust. However, many astronomers, including Lau, have calculated that most of the material ejected would be destroyed in the reverse shockwave from the explosion coming into contact with colder gases, reflecting them back onto the dust. Lau’s study showed that around 20 percent of the material could outlast such a violent encounter.

Optical observations of the far depths of the Milky Way Galaxy are obstructed by dust, which has always presented astronomers with a challenge to peer beyond the stellar clouds to understand the processes that make the stellar bodies that wander about the galaxy. Lau stated this new finding sheds light into the mysteries that have left past astronomers vexed, without data that could be analyzed to achieve a better understanding about the creation of the Milky Way and its inhabitants. Therefore, he believes that further studies and observations can be undertaken to reveal the true nature of the dust found in the Milky Way Galaxy from supernovae that died long ago to give life elsewhere.