The message that soft drinks are too sugary and not healthy for children (or anyone) has resulted in many parents opting for other choices. However, research shows that parents trying to avoid sodas are giving their offspring equally sugary drinks that are not healthy either. 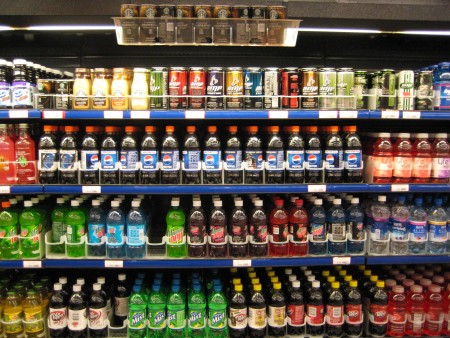 e preferable choices over soda. But many of those perceived to be “healthy” options have similar amounts of sugar. According to a recent study from the University of Connecticut’s Rudd Center for Food Policy and Obesity, people are being misled by product marketing and labels to purchase high-sugar drinks as an alternative to soda.

Writing about their research in Public Health Nutrition, the Rudd Center team found that 96 percent of the nearly 1,000 parents they surveyed had given their children ages 2 through 17 sugary drinks within the past month. When parents were asked which beverages are healthiest for their children, most said juice and milk. Yet they continued to serve other drinks to their children.

Most of the parents surveyed did know that many of the drinks they give their children were not healthy. For example, only six percent believed that soda was “healthful.” Almost half of the parents surveyed believed flavored waters to be healthy choices; 30 percent indicated that they believed fruit drinks to be a good alternative and 27 percent indicated that sports drinks were healthy. Iced teas, energy drinks, regular soda and diet soda were endorsed by 12 percent or less. The study also found that black and Hispanic parents were more likely than white parents to rate some of the sugary drink options as healthy.

The parents were asked which drinks they had served their offspring in the prior month. They came from, on average, 2.9 of six categories the research team established; they were fruit drinks, sports drinks, soft drinks, flavored water, bottled iced teas or energy drinks.

The parents surveyed in general believed that the drinks they chose were better for the kids than sodas. They indicated they were influenced by nutritional claims that appeared on the beverage packaging. Those claims often used the words “real” or “natural,” or indicated that they contained vitamin C, antioxidants, or lower amounts of sodium or calories. For example, packages that said the drink “contained real fruit juice” did not readily point out that the juice content was less than 10 percent and they were loaded with sugar.

Many knew that Kool-Aid is loaded with sugar. They were unaware, however, that 20 ounces of Sobe, a flavored water drink, has comparable levels of sugar as the same amount of Coca-Cola and Kool-Aid. Capri Sun is not much better; it contains more than 80 percent of the sugar that sodas do.

The study comes at a time when sales of soft drinks, both regular and diet, keep declining. It indicated, however, that parents are opting to avoid sodas with equally sugary drinks that are not better options.