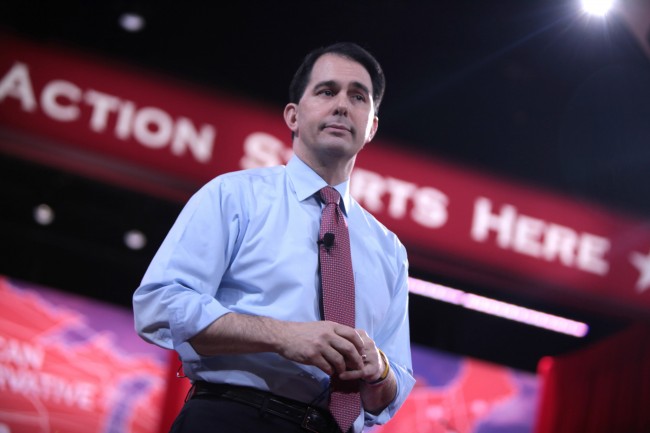 Thursday, at the Conservative Political Action Conference (CPAC), Scott Walker appeared as the man who got rid of Wisconsin’s public unions and gave a fantastic stage performance. Walker came in second place at CPAC with a close 26 to 21 percent, but in the second choice ballot he beat Paul, 19 to 16 percent. Walker is the second choice winner. At the CPAC, there were those that said Walker would make a great candidate but there were not many who were willing to work on his campaign. Walker is liked, but not well liked by Republican voters.

The three-day CPAC convention in Washington is attended by many libertarian-leaning young, college students. College students and people ages 18 to 25 have different views and their priorities do not line up with the conservative, Republican lifestyle.

3,000 attendees voted, half between 18 and 25. They were concerned about economic issues, jobs, and taxes. These were the most important issues in determining who to support as the Republican nominee for presidential candidate 2016.

Scott Walker gave an outstanding and confident performance in Iowa. However, after his speech in Iowa it could go either way, but most likely to the extreme.

The Club for Growth, Saturday, hosted 200 people for its winter conference. Attendees were eager to see the CPAC Scott Walker, however, who they saw instead was a Scott Walker who was unsure of himself, shaking and not very clear on his stance concerning policy details.

Walker was accused by Frayda Levin of not being prepared to talk about foreign policy. He disagreed, stating that reports had shown different. He also told Levin that he seemed to have upset a list of people who had briefed him on international affairs such as: George Schultz, Elliott Abrams, Henry Kissinger as well as the American Enterprise Institute and the Hoover Institution.

Walker did not stop there. He said experience in foreign policy did not matter, leadership mattered. Walker said the only necessary foreign-policy made in his lifetime was Reagan’s decision to fire 11,000 air-traffic controllers in 1981. He said Reagan sent a message around the world that America would not be toyed with.

Walker’s prepared speech was a 25 minute rushed presentation on economic policy. He stated voters do not care about social issues that have gotten Republicans into trouble. Voters want to focus on economic and fiscal issues.

The Club for Growth is compassionate about the abolition of the Export-Import Bank, a federal institution that gives loans to the entities it favors. Walker was insecure on this issue. After several minutes, he finally responded that he was opposed to the re-authorization of the bank. Then he said, “I mentioned the tax code, make it fair and simple.” This comment was random and did not relate to the topic at hand. However, it was ignored as Levin kept pushing.

When questioned about the Dodd-Frank issue, President Obama’s answer to the financial crisis, Walker again talked about taxes. Levin was not impressed. She reminded Walker that he had constituents there that had been through a Dodd-Frank audit and the turmoil it had caused. Then she flat-out said, “Are you just, to be honest, not that aware…?” He commented that the issue went beyond Dodd-Frank and promised many plans should he run for president.

Conservatives like Scott Walker because of the progress he has made in Wisconsin. He has had many legislative and electoral victories. He is going to pass a right-to-work legislation that appeals very much to the Club for Growth. However impressive Walker is in Wisconsin, he failed nationally.

Walker is not “in the middle” as he claims. He was elected as governor by the white, conservative suburbs. The media showed Walker as a sympathetic conservative. That is why he cannot handle those trick questions that throw him off-balance each time.

Walker will only remain a leading candidate for as long as he does not have to appeal to people, according to The Daily Beast. His speaking may be advancing but it will not compete with someone who can maintain the audience’s attention.

Last month at a Walker fundraiser, former New York Mayor Rudy Giuliani, bluntly questioned the patriotism of the president of the United States. When Walker was asked about Giuliani’s comments, he simply said that he has not asked Obama about his love for America. However, Walker did tell “Fox News Sunday” that the president or anyone who was willing to put their name on the ballot has to love his country to activate that ability.