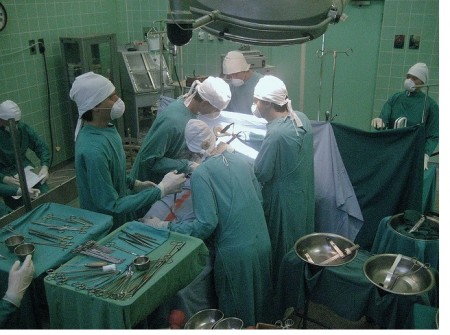 The first successful penis transplant worldwide gets action. Experts believed it would take the 21-year-old patient at least two years to fully recover, after just four months he has defied the odds. The nine-hour surgery led by Professor André van der Merwe, took place at in Bellville, Cape Town at Tygerberg Hospital on December 11, 2014.

A team of South African surgeons are proud to announce they performed the world’s first successful penis transplant. The young man lost his penis in a faulty circumcision three years prior. The loss of a man’s penis can be traumatic; especially for a teenager. According to van der Merwe, there are reports of suicide from this type of trauma and “When this happens the victims may not have the capability to process such trauma psychologically.” He added:

Many young men lose their penises every year due to complications arising from traditional circumcision. This is a very serious situation which proves there is a greater need in South Africa for this kind of procedure more than anywhere else in the world.

The happy transplant recipient sought medical help three years ago when his penis was first amputated. The incompetent surgeon who tried to perform his circumcision during an initiation ceremony cut off his entire penis instead of only the foreskin. The sad truth is this man is not alone in this type of experience. There are nearly 250 other victims who suffer this trauma yearly in South Africa. Some have their penis severed accidentally while others have theirs amputated to treat gangrene or another local infection.

Despite the three-year gap between the procedures, the surgical team was able to connect the donor penis to the patient during the lengthy operation. Details of the donor were not clarified but the recipient now claims the organ as his own. He is proud to declare his new addition is alive and fully functional.

Professor Frank Graewe,  Stellenbosch University, said this is a massive breakthrough and it was an honor to be part of this groundbreaking procedure.  The team proved this can be done and someone can receive an organ that is just as good as the one they had previously.  Graewe,  head of the Division of Plastic Reconstructive Surgery, added:

Preparation and planning for the study began in 2010 and involved extensive research. One of the main challenges of the study was finding a donor organ. The heroes in all of this, said van der Merwe, are the donor and his family who saved the lives of others by donating the kidneys, corneas, lungs, liver, heart and the penis. Without families and donors these types of studies cannot be performed and medical success stories are hindered.

It to their credit that a team of South African surgeons have successfully performed the world’s first penis transplant. The 21-year-old patient had his penis amputated after complications arose from an initiation ceremony which included a traditional circumcision. He has made a complete recovery and is excited to announce his new organ is alive and well.

Reportedly, as part of the study, nine additional patients are set to receive penile transplants. Eventually this procedure could be extended to men who have lost their penises from cancer or as a final-resort treatment for cases which involve severe erectile dysfunction relative to medication side effects.

One Response to "World’s First Successful Penis Transplant Gets Action"