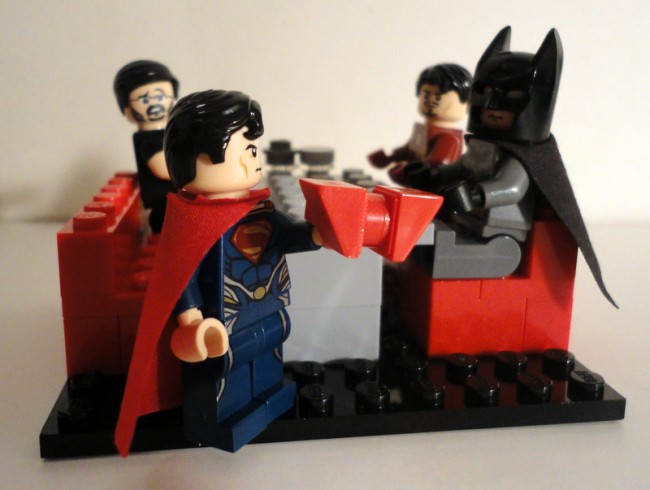 Fans who have grown up watching Batman and Superman movies and cartoons seem a little unhappy after seeing the new trailer of Zach Snyder’s 2016 movie Batman v Superman: Dawn of Justice. Snyder may have decided to go a different route by bringing Batman into Superman’s world, but fans just do not get why both are fighting each other in the first full-length trailer for the movie which released this past weekend.

The dark and somber mood of the trailer sees the movie picking up from where Man of Steel, the previous Superman movie ended. Superman is being scrutinized as everyone questions where he came from and what his purpose is. In short, no one likes him. Batman seems to blame Superman for the destruction of the city and there is a shot of a Superman statue with the words “false god” written on it.

The trailer ends with a Batman and Superman face-off which is probably not the result of the Wayne Enterprise satellite getting knocked off in the last Superman movie. Fans recognized this scene from Frank Miller’s 1986 mini-series The Dark Knight Returns. Then Batman inquires, “Tell me, do you bleed?” and a threatening, “You will” is heard as the screen goes dark.

Henry Cavill reprised his role as Superman while Batman is portrayed by Ben Affleck. Jesse Eisenberg sans his trademark curls, plays the role of Lex Luthor, Superman’s arch nemesis. The IMDb page also lists Gal Gadot as Wonder Woman, Jason Momoa as Aquaman and Ray Fisher as Cyborg. This is most of the Justice League, but only two characters are seen on the screen with rumors of Robin’s yellow cape being in the background in one of the Batcave scenes.

Trailers are made for the purpose of drawing the audience in and encouraging them to watch the movie, but some fans were already unhappy with the premise of the fight. Twitter user, @jlschaefer does not understand why the two heroes need to fight. “And that trailer does nothing to help my confusion,” she tweets. Another user @lorelei_jiju urges them to stop making more Batman movies if they cannot outdo the last one. She writes, “I just hate them so much for doing this to the franchise.”

Superman fans are also worried that he is being made out to be the bad guy, a lingering effect from the time he killed General Zod in The Man of Steel. Seeing the Batman-heavy trailer fans felt justified as Superman is made out to be the bad guy with Lex Luthor calling the winged crusader “the devil” who came from the sky. Some though, just did not like the look of the trailer and complained about how most superhero movies these days are getting depressing with too much death and destruction. “The gods need some Xanax, stat,” writes Mark Morford, a blogger at SF Gate.

Morford then writes that comic books have been slowly crossing over to a grittier look to appeal to a wider fan base. He then accuses the ever serious and tense Batman of dragging Superman into the same mold, one abound with brutality, cruelty, depression and heartlessness.

Fans also do not like Batman’s second suit. Beside the usual skin-tight outfit, he is seen wearing an armored suit in his fight against Superman. While this is in keeping with the original comic, where the suit is outfitted with missiles and Kryptonite, people have just not seen anything like it yet. A DC aficionado, Deepak Kumar did not like the Batsuit’s glowing eyes in the trailer. He also had a problem with the look of the first suit, which seemed to be made out of a cloth-like material in closeups.

The Batman v Superman trailer had to go head to head with the Star Wars: The Force Awakens trailer. The movie and popular culture blog, Film School Rejects says that the Star Wars trailer looks fun where they pull viewers in with Harrison Ford’s Han Solo and Chewbacca, whereas the Dawn of Justice trailer leaves everything up in the air. Viewers cannot figure out which city is it set in, Metropolis or Gotham, but the Superman statue suggests Metropolis. They cannot even make out whether the Batman versus Superman Smackdown takes place in the present storyline or in the future, like the comics.

The next trailer might clarify these points, but till now the official trailer that was released four days ago has received over 25 million views. Snyder also has the uphill task of convincing unhappy Batman and Superman fans that their two favorite superhero friends are fighting each other for a valid reason.