Capitol Police Officials Said Terrorism Was Not Involved in Suicide 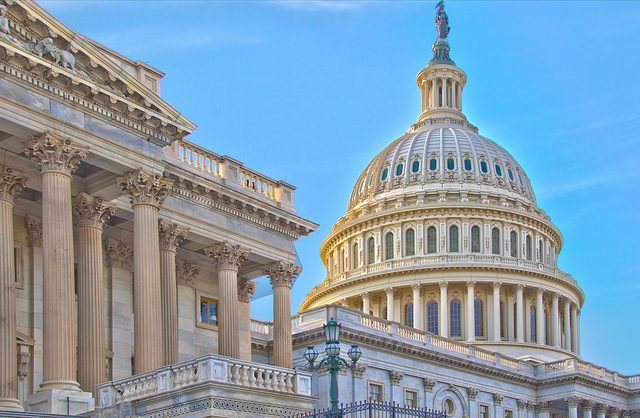 U.S. Capitol police officials said terrorism was not involved in Saturday’s suicide near the west front entrance of the building. The man was carrying a sign with a social justice message on it, but did not threaten or interact with anyone before he fatally shot himself.

The incident, occurring around 1 p.m., left visitors and tourists in shock as police quickly responded. Two buildings, including the U.S. Capitol and the Capitol Visitors Center, were locked down in a precautionary measure until around 4 p.m.

A middle-aged man walked in the public area when he suddenly, and without any warning, drew a gun and shot himself once, according to witness’ statements. His identity remains confidential until his family is notified. No one else was injured in the incident.

Police said a backpack and a suitcase with rollers were found near the victim, and officials called in a bomb squad as a precaution. There was not anything suspicious in either of the items, officials said.

The incident did little to disrupt activities in the area, including annual cherry blossom activities being held in the National Mall and other locales near the U.S. Capitol. Congress is not in session, so police said there was no cause for alarm regarding the safety of congressional members and others usually in the building.

This has not been a good week for those living and working in Washington, D.C.. A substantial power outage on April 7 left a lot of workers and visitors in the dark for more than two hours, affecting more than 2,000 customers. The U.S. Capitol, the U.S. State Department, the White House, the Energy Department, the Justice Department, the Smithsonian Institution, various tourist attractions, Georgetown University, and the public subway system were all affected.

Most buildings had backup generators to provide emergency power or the buildings sustained power with intermittent outages. Some buildings that were left in the dark were evacuated while security in others, including the White House, went on a heightened alert for a brief period. It took longer for visitors to move around the White House, because security equipment could not be used without power. There were also reports of people being stuck in elevators in a variety of buildings around the city.

The transit system, known as the Metro, said all stations and trains were able to run throughout the ordeal because all had power. However, some stations had to operate with emergency lighting.

Officials said the cause was easily explainable. A transmission conductor broke free at a power substation in southern Maryland, causing a small explosion and fire. Firefighters put out the blaze in 35 minutes, officials said. Bill Smith, information officer for Charles County Fire and EMS, said the transmission conductor incident was accidental. There was no sign of a sinister cause such as terrorism or arson, he said.

Homeland Security, which responded immediately after power went out, quickly determined the cause was a natural occurrence and posed no serious threat to national security. While U.S. Capitol police officials said terrorism was also not involved in Saturday’s suicide, the events of the week put the security in Washington, D.C. to the test.

Capitol Police Officials Said Terrorism Was Not Involved in Suicide added by dareing.m on April 12, 2015
View all posts by dareing.m →