Exoplanet 51 Pegasi B Seen for the First Time 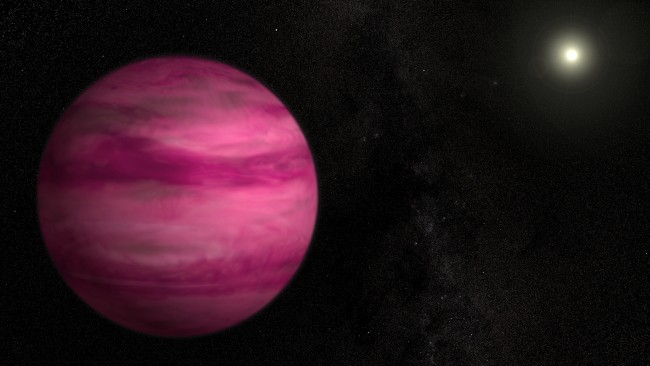 Exoplanet 51 Pegasi B has now been seen for the first in visible light. According to astronomers, this is the first time they have ever that a star orbiting planet has been observed in the visible section of the electromagnetic spectrum. The planet was originally discovered in 1995 and it categorized as a “hot Jupiter.” This is a class of exoplanets that are relatively common throughout the cosmos, which are small in mass and size compared to Jupiter and orbit a lot closer to their host stars.

The exoplanet, informally known as Bellerophon, is located about 50 light-years from Earth, orbiting its host star 51 Pegasi in the constellation Pegasus. Currently, the planet is the only one ever found to be orbiting a star that is very similar to the Sun.

Astronomers captured the image by using the High Accuracy Radial velocity Planet Searcher (HARPS) at the La Silla observatory in Chile. The HARPS detector produces spectrographs, images of the visible light spectrum that can show highly accurate details of exoplanets and other bodies, including their atmospheric chemical composition.

To study the atmospheric composition of exoplanets depends on postponing the measurement until it orbits in front of its host star. Though, thermal readings can be taken when the planet is behind the star. This method is only possible in planetary system where the orbit of the alien world is perfectly aligned in a way in which it passes between the Earth and the Sun from afar. The HARPS instrument has aided astronomers in finding even more exoplanets.

Jorge Martins, a researcher at the University of Porto in Portugal, explained this is an extraordinary detection technique because it allows astronomers to observe and measure an exoplanet’s orbital inclination and mass, which is important to understand the planetary system. Moreover, it allows them to get an approximate measurement of the planet’s reflectivity, which can be used to estimate the composition of the atmosphere and surface.

With the data from HARPS, astronomers found that 51 Pegasi B is a bit bigger than the planet Jupiter. Though, the mass is only about 50 percent of it. Astronomers at the European Southern Observatory (ESO), which utilizes the HARPS observatory, found that the exoplanet has a highly reflective characteristic. As well, its orbit is inclined around nine degrees between its host star of 51 Pegasi and the Sun.

Officials at the ESO explained the spectrum of the host star will be used as a base to guide the search for other signatures of light that are said to be reflected off the exoplanet as it orbits the star. According to astronomers, this is a very hard thing to do, as exoplanets are exceedingly dim in comparison to their luminous host stars.

Since the original finding of 51 Pegasi B in 1995, over 1,900 additional exoplanets have be located and observed in star systems. Since exoplanet 51 Pegasi B has been seen for the first times through the visible light spectrum, it has given astronomers hope that this new type of detection method will allow them measure the orbital inclination and mass of other exoplanets, which is essential to fully realize the characteristics of the planetary system.