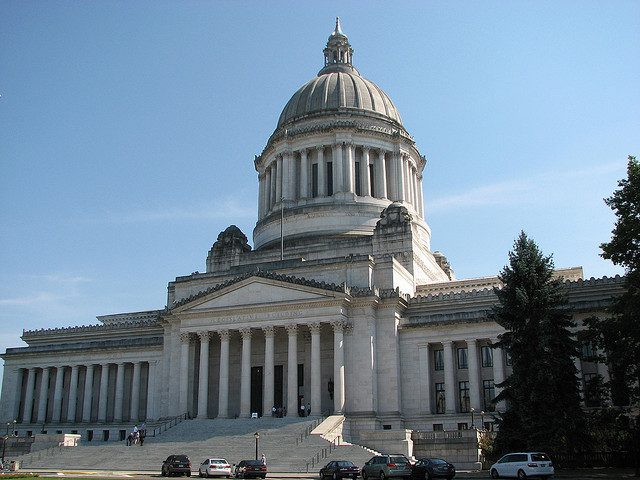 Flags flying over the Washington State Capitol stirred controversy over the weekend, as members of the Tea Party protested against the Chinese flag flying next to the American and other state ones. The flag was removed Saturday afternoon as a result of the protest, although officials said it was scheduled to be lowered soon anyway.

The raising of the Chinese patriotic symbol was to honor trade meetings between Washington Gov. Jay Inslee and Chinese Ambassador Cui Tiankai. Flying foreign emblems is something done regularly, according to Jaime Smith, media relations director to the governor. Smith said it is protocol to fly those from a dignitary’s home country when they are visiting the governor. There have not been any protests prior to this one, regarding any others that have been flown over the capitol building.

Protestors had plenty to say while the Chinese symbol was being lowered. Some cheered as it was removed, with some saying that they did not want a Communist symbol flying on American soil. Others called for Inslee to resign and for the Chinese flag to be burned.

At least one Republican official expressed her disappointment and anger at the decision to fly the Chinese symbol. Rep. Elizabeth Scott wrote her opinion on a political website, and stated she is angry that the governor disparaged Indiana for the passage of the Religious Freedom Restoration Act, which was meant to protect freedom of conscience, and then fly a symbol of a county known for imprisoning people with opposing beliefs. She said that is why this issue is stirring so much controversy at the Washington State Capitol.

According to the Chinese news accounts, the meeting between the ambassador and the governor went well. Trade between China and Washington has increased over the past few years, and Washington is seeking to improve the relationship to increase trade, culture and technology. Along with those efforts, companies including Boeing, Starbucks and Microsoft, all based in Washington, are working to open businesses in China. The ambassador said he is hopeful the Northwest state will take on more opportunities to dig deeper roots in Chinese business.

Tea Party protestors said they were pleased the flag came down. They have one of their own. Some held what is known as the Gadsden flag, which is suppose to symbolize the Tea Party movement. It did not provoke as much attention to onlookers, as the Chinese flag flown over the Washington State Capitol, that stirred so much controversy.