Floyd Mayweather Jr. Will Have His First Childhood Mentor in His Corner 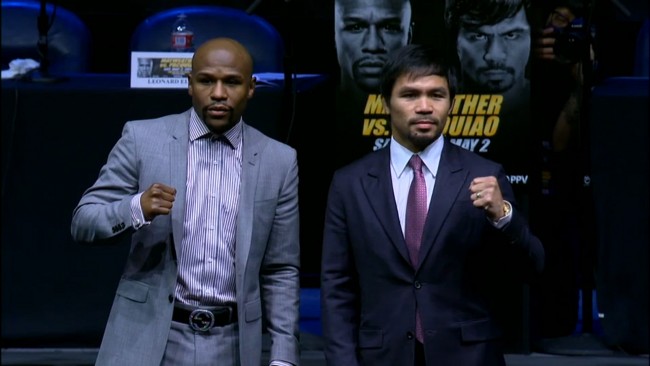 Floyd Mayweather Jr. will have his first childhood mentor and trainer, his father, Floyd Mayweather Sr. in his corner for his biggest fight. Mayweather Sr. still remembers the moment when he had realized that his son would grow up and be the champion in the boxing ring. This was when Mayweather Jr. was only about 10 months old, but his father started showing him various boxing postures. Mayweather Sr. said that he saw his new-born son, who had not even started walking, punching the air while lying down and doing the very same postures that he had shown him.

That was the moment when he realized that his son was destined to be a fighter. Mayweather Sr. shared another one of his father-son moments. However, this was a tragic incident etched in his family’s memory. Mayweather Sr. was facing the wrong end of his brother-in-law’s shotgun after a dispute in Grand Rapids, Michigan. This was while Mayweather Sr. was holding his one-year-old son in his lap. He judged quickly that his brother-in-law would not shoot the baby and did not put him down. This, he said, was not because he was using his son as a shield. He said that he did not want to die. His brother-in-law lowered the gun towards the leg of Mayweather Sr. and shot him. This destroyed his left calf, and along with that, his career as a welter-weight contender.

Mayweather Sr. has not precisely been the guiding force for his son who is expected to earn around $180 million. He has spent extended periods of alienation with his son. He was serving time in jail on a drug conviction when Mayweather Jr. fought in the 1996 Olympics. But it is a fact that Mayweather Sr. is the first trainer of his son as he originally taught him the defense technique. The fixture against Manny Pacquiao is being regarded as the biggest fight of the 38-year-old boxer’s career. May 2, 2015, Mayweather Jr. will have his first childhood mentor in his corner at the MGM Grand Arena.

Mayweather Sr. is confident about the abilities of his son and believes this will be just another fight for him. Although the huge publicity and massive fan following have raised expectations for a cracker of a fight, he insists that they consider Pacquiao as just any other opponent. He went on to say that this is nothing different as they would not be fighting Cassius Clay. He said that they are merely going to fight an ordinary guy. Mayweather Jr. had recently said in one of his comments to media that he was better than the all time icons and the greatest boxing legends ever, Muhammad Ali and Sugar Ray Robinson. This statement has divided the boxing community further as many like Wladimir Klitschko having sounded their displeasure about it. At the same time, many stalwarts like George Foreman have said that Mayweather Jr. is in fact better than these icons.

Mayweather Sr. is now the main man behind his son and champion boxer, Mayweather Jr. and like every father who is proud of his son; he believes that his son is the best. The Mayweathers have not shared such an amicable and harmonious relationship for some time now. They had a big fall out more than 10 years ago. They also had a massive feud in 2007 after which Mayweather Sr. almost took up the job of training Oscar De La Hoya against his own son. The fight against De La Hoya is regarded as the turning point in the career of Mayweather Jr., making him a household name. However, the father-son duo have reconciled now and Mayweather Jr. will have his first childhood mentor in his corner during the biggest fight of his life against Pacquiao.

2 Responses to "Floyd Mayweather Jr. Will Have His First Childhood Mentor in His Corner"