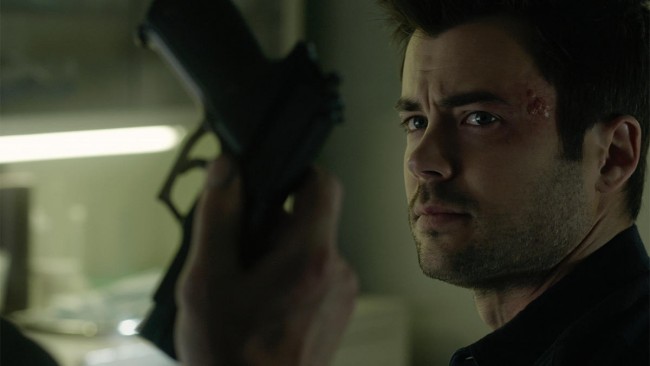 On Helix tonight, during the episode The Ascendant, Peter Farragut finds order in his life as he attempts to become the new leader of the remaining cult members on the island of St. Germain, with the help of Sister Anne. Actually, he is descending further into madness. The root stock, Mother, was destroyed in the last episode of Helix, when the Navy sprayed poison on the island, attempting to stop the spread of the deadly virus by killing every living thing on St. Germain.

Helix began with scenes of Peter and Anne chopping up the dead bodies of cult members and then showering the blood off of their bodies. Then, they met and shared a romantic kiss in the shower room, as flashbacks were shown of them still dismembering the dead bodies.

“Why should you want to?” Anne asked him. “You’re reborn now, Ascendant.”

Peter said that they should not stop with the island. He suggested “healing” the outside world, also.

Peter said that the CDC had “discovered a cure for mycosis.” He added “We need to get out hands on the cure, and then eliminate them.”

Then, on Helix, Alan met with Dr. Kyle. Alan gave him some medicine. “I don’t understand. I tried to kill you yesterday.”

Alan told him that it was not him who had really been acting like that, it was because of the virus. Alan asked Kyle for a gun. Kyle said “Not after what happened in Paris.”

Alan then told him the number of a safe deposit box, which contained all the proof he might need.

Dr. Jordan and Dr. Jules met and Alan walked in and saw Jordan’s baby in a jar. “My God, is that our child?” he asked. 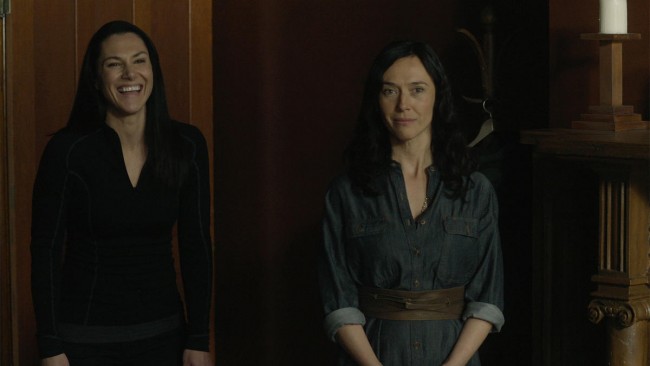 Then, Dr. Julia Walker was told by Anne that there might still be remnants of the roots of Mother around. She would have to meet with Eli, first.

Eli was Dr. Peter Farragut. He asked Julia for immunity for both himself and his followers, and 20 percent of the royalties that might result, if he helped her find remnants of Mother.

Kyle met with Soren, and Kyle said he was getting better. Olivia, Soren’s mom, said that Kyle needed to get off the island. She told Kyle “He wants the cure, and once he gets it, you’re going to wind up in a barrel.” She told him that she was helping him because he had helped her son.

Back with Alan and Sarah, Alan said “What kind of life is he going to have?”

Sarah told him he had an obsession with Ilaria, and she wanted him to think more about her and the future of their baby.

When Helix came back on after a break, Julia was checking out the paintings at the Abbey for clues as to where other remnants of Mother might be.

Alan walked in to where Dr. Walker was looking at old books and records. She said “One thing stays the same –the stars.” 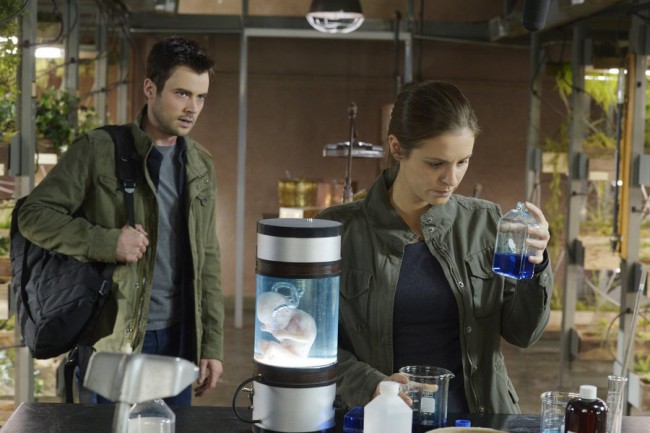 Kyle entered the room where Dr. Jordan was, and he said “What the h**l’s that?” about Sarah’s baby in the jar. She said that was her baby. Kyle said that they had to leave the island. In the halls, Peter and Anne walked about, with axes in their hands.

Dr. Jordan placed her hands on the jar containing the fetus, refusing to leave the baby. As she did so, Helix went to another commercial break.

After Helix came back, Sarah was still trying to find a way to get the jar containing her fetus out. It was leaking. Kyle gave her his chewed-up Juicy Fruit gum to use to plug the hole for now. She told him she needed to find another jar. Kyle said he would not leave her, and her son. 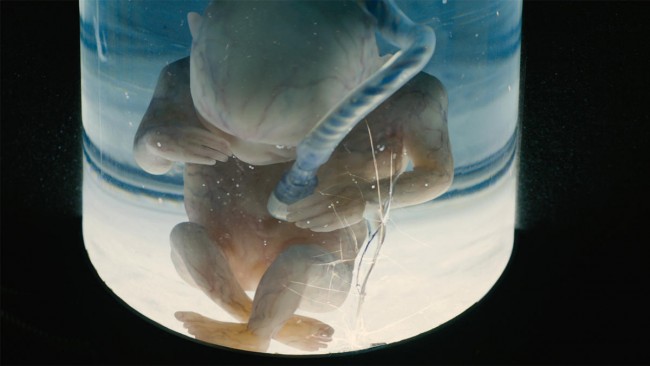 Dr. Walker talked with Alan. She said that there was no way to destroy all of Ilaria, that they had branches all around the world.

Alan told her “I killed all of those Immortals for you.”

She told him that her father had given her immortality. “It was perhaps the best, and the worst, thing that has ever happened to me.”

Peter and Anne met in the room where their baby that they had stolen was. Anne told him that when they found the CDC, “show no mercy.” He said the same to her, and they kissed each other.

Alan and Dr. Walker poured over the books and paintings. “So, we found the star — what about the hill?” They found a triangulation point, and Jules said “The tree’s here — at the Abbey.”

Dr. Kyle heard Peter and Anne approaching, he and Soren hid and overheard Peter talking with Olivia. Peter asked her “You seem nervous. If you care about your son, why risk telling the CDC about Ilaria?”

“Eli, I would never betray you,” she said.

He told her “Don’t make it worse,” and he then broke her neck. Helix went to yet another commercial break.

Helix came back after the break, with Soren saying “Why did he kill my mom?”

Dr. Kyle called him “the bravest person I ever met.” He said “I lost my mom, too, when I was not much older than you. I’ll be your family now, if you want.’

Anne and Peter searched and came to a room. She said “They’re not here,” and she suggested that they “split up.”

Sarah confronted Anne and said “Where are they? You’re going to tell me, one way or the other.”

Alan talked with Dr. Walker, and told her about how Michael had been. They came to a room, where Alan said Michael counseled people. Dr. Walker grabbed a stand containing candles and pounded on the floor boards with it. “Help me!” she said.

Alan ripped up the floorboards and they discovered that “Michael built the Abbey right on top of the Mother Tree.”

Anne said to Sarah “That thing over there is not a child. Keeping it in a jar is both cruel and pointless,” She also told Sarah about the machete Sarah had “Put that away. We both know that you won’t use it.”

Sarah said “Oh, really?” Then, she stabbed Anne’s foot with it.

After another break on Helix, Anne told Sarah “Here is where Michael bestowed his greatest gift, the gift of life.” They were back down in the room where the mothers were kept.

“Where are they?” Sarah asked. She finally found a suitable jar.

Peter, holding the baby he and Anne had stolen, had a tender moment with him, saying “I will give you everything that my father didn’t give to me.”

Alan and Dr. Jules were underground. “This is unbelievable — we’re inside the root system of a tree!” Julia said. She told him “There are root systems that have been alive for hundreds of years.” Alan said that those were trees, not stumps.

Kyle tried to radio help, saying “May Day! May Day!” He said “Listen up! I have a cure for the pathogen that’s affecting your ships!”

In a hallway of the Abbey, Anne limped along. Peter said “My God! What happened? Who did this to you?”

Anne told him Dr. Jordan did it. “You have to stop her and Dr. Sommer. They want to leave the island.”

“It’s Mother! She’s everywhere!” Jules told Alan about the roots that seemed to be everywhere under the island. 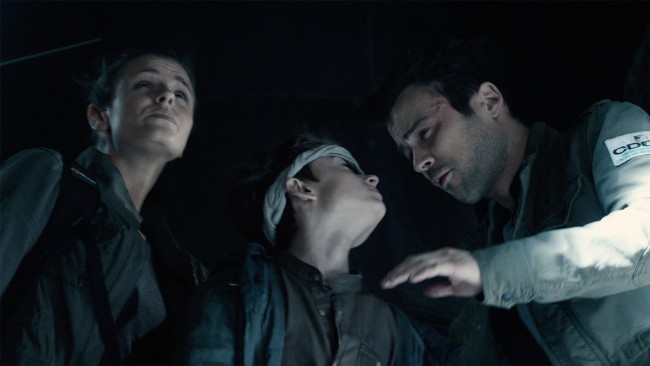 A helicopter arrived to rescue Kyle and Sarah and her fetus. Peter showed up and he shot up at the people in the helicopter, killing them, as Helix headed to yet more commercials.

Helix returned for a couple of minutes. “It’s in the soil around the roots.” She said that she did not need actual roots, just what was in the soil. “This will eliminate the need for Narvik!”

“I’m sorry, Jules,” Alan said, pointing his gun at her. He told her she was “as bad as Ilaria,” if she went through with her plans. She turned around, and pointed a weapon of her own at Alan. One of them fired, though it was unclear which one. That was the end of this episode of Helix.

Helix is winding down the second season now, but it is still as twisted as ever. Peter, egged on by Anne, has gone totally bonkers, and has taken over as the new leader of the cult. He calls himself Eli, and he and his insane love interest, Anne, seemingly enjoy dismembering bodies. Peter may be “The Ascendent,” in Anne’s eyes, but he is descending into madness. Alan and Dr. Walker still searched for remnants of Mother, though one of them might have been wounded or killed by the other at the end of the episode. Though Amy’s dead (maybe) there was still plenty of craziness to go around.

One Response to "‘Helix’: ‘The Ascendant’ Descending Into Madness [Recap & Review]"