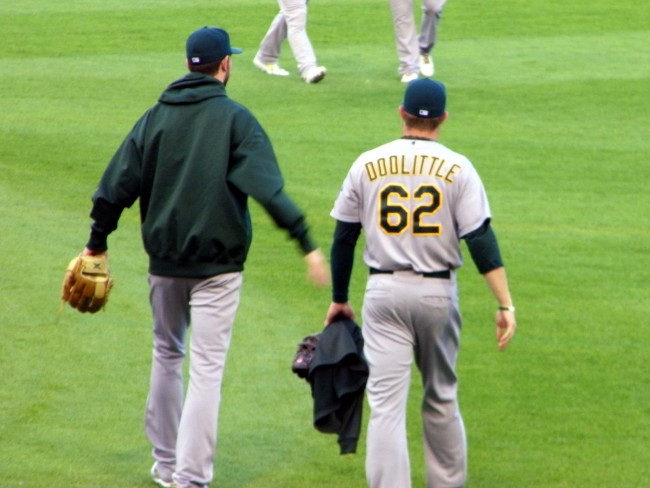 The Oakland Athletics are holding their first ever LGBT Pride night on June 17, 2015. Unfortunately, not everyone was happy with this announcement and some season ticket holders have said that they would be selling their tickets to the game, which is against the San Diego Padres. Enter Oakland pitcher, Sean Doolittle and his girlfriend Eireann Michael Dolan, who have stepped up to make sure the stadium is filled for the first ever LGBT night.

Doolittle and Dolan, have said that they would purchase the unwanted tickets, in order to make sure that the stadium was full for the event. Dolan even took to her personal blog to say that people are entitled to their own beliefs, and that while she could not stop the people from selling their tickets, she also would not tell people they were right or wrong for their actions or ideas. Instead, she says that if attending an Oakland A’s game on a night dedicated to LGBT Pride would make people uncomfortable, then it is better that they sell their tickets. She then points out that she has the perfect buyer in herself.

Dolan is willing to buy any of the unwanted game tickets for June 17 at face value. Anyone interested in selling those tickets is asked to send her a Tweet at @EireannDolan. Then she goes on to say what will happen to the reclaimed tickets. Any tickets she purchases will then be donated to the Bay Area Youth Center’s Our Space community for LGBTQ youth.

In order to fill the Oakland stadium on LGBT Pride night, pitcher Doolittle and girlfriend Dolan have even set up a GoFundMe account in order to raise money to purchase all the tickets. They will then match the funds raised up to $3,000. The original goal of the fundraiser was $6,000, which was met in less than 24 hours. Dolan went back into the fundraiser thanking everyone for the money already raised and then upped the goal amount to $10,000, after the Oakland A’s opened three additional seating sections for the night. In the fundraiser post, Dolan specified that any money raised over the goal, would be split between three local charities, AIDS Project East Bay, Frameline and Our Space.

Since the fundraiser started on March 31, over $13,000 has been raised by over 300 individuals. There have been over 700 shares of the campaign as well. In the original post on the fundraising page, Dolan expressed her happiness and surprise over the reactions of so many people. Many offered to donate their tickets to Our Space, with still others offering to donate money to help buy the unwanted tickets. This outpouring of support was what inspired her to set up the GoFundMe page.

All of the money raised to fill the stadium for the first ever Oakland Athletics LGBT Pride night are prior to the matching contribution from the pitcher and his girlfriend. This means that with a little over 24 hours into the efforts to purchase the June 17 tickets, over $16,000 will have been put towards supporting not only the LGBT Pride event but also local charities.