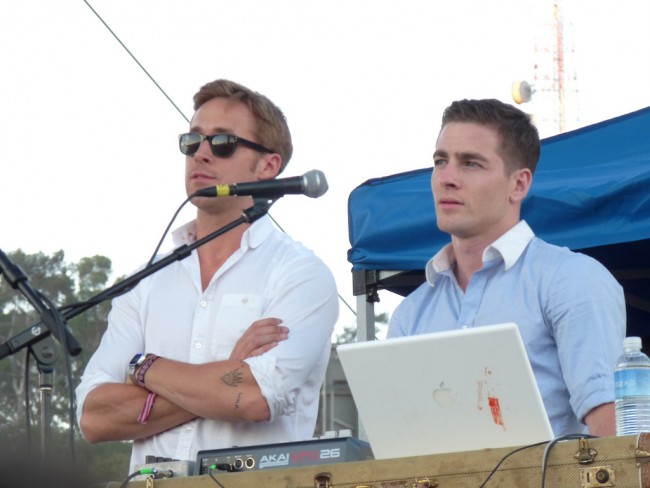 Oscar-nominated actor Ryan Gosling is discussing the possibility of teaming up with Guillermo del Toro, for a new take on Disney’s Haunted Mansion. This Disney project is based on a theme park ride.

Plot details are being kept quiet, but its description is that of a family supernatural adventure. D.V. DeVincentis (High Fidelity) is currently working on the script for the film. This project has been quietly in the works since 2010, before being announced at Comic-Con this past July. Fans are hopeful that there will be a significant improvement from the 2003 original, starring Eddie Murphy’s.

Gosling and del Toro have reportedly been meeting for months, in order to find a project to work on together. Pairing up del Toro and Gosling is presumably a perfect fit, because they are both big Disney fans. The two spent the weekend of this year’s Oscars enjoying the rides at Disneyland (including the Haunted Mansion.) del Toro is said to enjoy the Haunted Mansion ride so much that he has a room dedicated to it in his home. This room has original art from Marc Davis, secret bookcases and wallpaper from the original ride.

Gosling’s role is not official yet, so what role he will actually play is unknown at this time. Also, no details of the plot have been revealed about the movie and del Toro is not sure if he is going to direct this movie yet either. If he has the time, and Gosling is involved, the assumption is that he will direct this movie.

This movie will be a thrill ride for the whole family to enjoy, but it will be scary. Walt Disney is a creator of some of the scariest images from del Toro’s childhood. He made both nightmare images both sweet images, although people forget about the scary images. This movie honors the scary side of Disney’s legacy.

In March, del Toro did a Q&A with Gosling about the new movie that he wrote, produced and directed. Released by Warner Bros., Lost River opens April 10 in the UK. Lost River is starring Saoirse Ronan, Ben Mendelsohn, Christina Hendricks, Matt Smith and Gosling’s partner Eva Mendes. Next, Gosling will be starring opposite Russell Crowe in The Nice Guys, a crime movie by Shane Black, which premieres June 3. He will also co-star in the upcoming Terrence Malick movie, which still does not have a release date. At this time, Gosling is working on the filming of The Big Short (Adam McKay). The Big Short also contains fellow acting vets Christian Bale, Brad Pitt and Steve Carell.

Haunted Mansion is a homecoming for the former Mouseketeer and Remember the Titans star of the well-loved Disney sports movie. Gosling has also done films for other audiences, such as Crimson Peak.

Under Walt Disney’s guidance, and developed by Imagineers, the Haunted Mansion opened in Disney World in 1969. It has since expanded to Tokyo Disneyland, Disneyland Paris, and Hong Kong Disneyland. The ride inspired the aforementioned 2003 original. It also influenced the anthology comic book that launched in 2005, from Slave Labor Graphics.