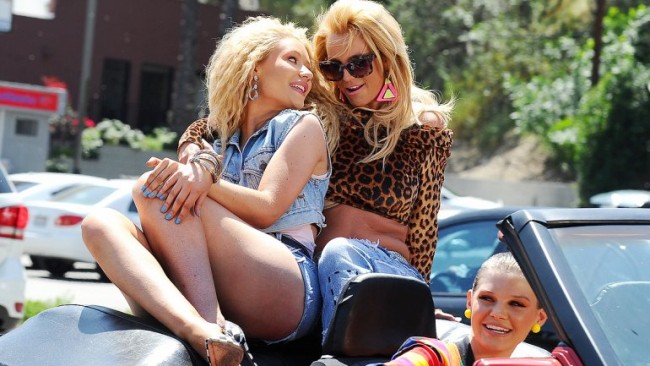 The new song collaboration by Britney Spears and Iggy Azalea, Pretty Girls, has been yanked from several articles published about it, due to copyright infringements based on the Digital Millennium Copyright Act of 1998 (DMCA). That is a shame, as it has been predicted to become the big hit of the summer of 2015. Britney Spears’ and Iggy Azalea’s attorneys apparently take a dim view about any of the duo’s songs being leaked before the date that they are scheduled to be released.

That all means that the Britney Spears/Iggy Azalea collaboration, Pretty Girls, has been removed from sites like TIME and Hollywood Life, who have advertised in their headlines to “Listen,” to the song, or “Hear” the song. The song will not officially be available until it hits iTunes on May 4.

The good news about Pretty Girls is that it is catchy, and that the duo of Spears, 33, and Australian rapper Azalea, 24, are currently working on a sexy, throwback style 1980s-influenced video to go along with it. Azalea starts off one of her verses with a reference to Roberta Flack and the hip-hop group, the Fugees, who were formerly known as Tranzlator Crew.

Both Azalea and Spears give great vocal performances in Pretty Girls, and Spears does not employ the vocoder, as she did in her cover of Tom’s Diner. Britney Spears goes full-out pop goddess on the song, and Iggy Azalea’s rap skills are also showcased in what could very well turn out to be the biggest hit of the summer.

The song has been described by an article in Hollywood Life as sounding “like old-school Gwen Stefani.” It is a song about — what else — pretty girls, and how they always seem to be in control of whatever situation that they find themselves in. One line has them wiping “the floor with all the boys” as they “Pour the drinks, bring the noise.”

Also, according to the lyrics of the Spears/Azalea song, pretty girls can do other things that might make females who are less gifted in the looks department envious of, like jumping “the line, to the front,” and doing “what we like,” and getting “what we want,” all because they are “just so pretty!” The song is about “Girl Power,” to an extent; it is about the power that pretty girls often seem to have, at any rate.

The Hollywood Life article mentioned that Britney Spears and Iggy Azalea will, according to an inside source, be singing Pretty Girls this coming May 17, at the Billboard Music Awards show. It will likely be one of the program’s highlights.

Britney Spears has had her share of big hit songs during her career, including Oops!…I Did It Again, Toxic, …Baby One More Time, and Womanizer, which reached Number One on the Billboard charts in 2008, but she has had a few misfires of late, as well. With Pretty Girls, incorporating an 80s pop feel to it while also seeming to have an immediacy to it, she and Iggy Azalea might manage to hit Number One on the Billboard charts yet again.

While Iggy Azalea has not been making music for as long as Britney Spears, she also has a series of hit songs to her credit. Among them are Beg for It, Black Widow and perhaps her biggest hit to date, Fancy.

Unfortunately for anyone who did not get the chance to listen to Pretty Girls before it was yanked off of various sites that it could be heard at, the official release date for the collaboration is still a day away. Blame the Digital Millennium Copyright Act of 1998 (DMCA) for that, although the DMCA has been an effective tool used by musical artists to stop their music from being pirated or leaked, which can potentially cost them a lot of money.