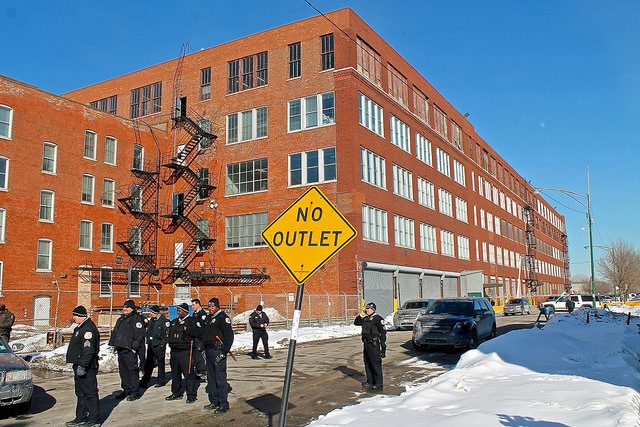 It was exposed not long ago that the Chicago Police Department had set up CIA-style Black Sites used to torture, interrogate and intimidate suspects without using due process and violating peoples’ rights. Set up in an old Sears building (now Homan Square), it is used by anti-gang and anti-drug squads to interrogate potential suspects in shocking circumstances.

An actual CIA-style black site was used in the “war on terror” as the CIA secretly detained and interrogated possible enemies of the state. There were several set up in the U.S. and around the world for this purpose not long after 9/11. The people that were supposedly detained in these sites were questioned about possible terrorist attacks, ties and any information to help protect the U.S., but not the ones in Chicago. In yet another display of militarization reaching our police departments, the sites were and maybe just another example of the the tactics and attitudes that our protectors could be using in the name of safety.

People in late February came together to protest, including activist group Anonymous and organizers linked to Black Lives Matter, at the site, dubbing it “Shut Down Homan Square” among concerns for the operation of the site. Homan Square is a rather unremarkable building on the West Side, that is drab and blends in as an unnoticeable building of sorts.

Protesters demanded a public inspection of the building take place; that any people under arrest be booked immediately and allowed to call an attorney and that a public conference take place, allowing people to ask questions about the facility. They also requested that the Chicago Police Department install posters that inform people of their rights as a prisoner. Very few attorneys have had access to the building and those that have have spoken of talking to their clients through floor to ceiling cages. The Chicago PD denies all of this, stating that those who are detained at Homan Square, like any other facility are processed with due diligence, following laws, rules and guidelines of the state.

People also want to know if other sites exist, with reporters from sites such as InfoWars researching and examining other potential sites. There are people who still don’t know that these sites exist. There is a black-out in mainstream news and media where they either refuse to acknowledge it or don’t even know about it. People who don’t believe it, say that its the police department being attacked by detractors of the Chicago PD, a supposed very corrupt organisation. Another concern is whether President Obama was aware of these facilities? It is for this reason that people want their questions answered. There are protests being held nation-wide to find out if there are more of these facilities around the country.

If there are more facilities it is very worrying, as there are reports of people who have been wrongfully detained there and tortured into giving the Chicago PD the answers they want, even if they are not involved with the crime. Computer program analyst, Kory Wright, recognised the building immediately when he first saw the article. He had been detained for at least six hours on his birthday nine years ago. He claims he was never read his Miranda rights and that his arrest was not entered into the system until after he had been released after being zip-tied to a bench in a purposefully overheated room without access to water or the restroom.

This is not the only story of torture at Chicago PD’s hand, as it comes to light that under former Police Commander, Jon Burge, was fired from his position in 1993 after a review board confirmed his tactics were torture. Thirteen years later, special prosecutors alleged a group of detectives had been told to torture more than 100 mostly African-American suspects to confess for crimes from the 1970’s and 80’s. Under the direction of Burge.

The Chicago PD are increasingly having a lot to answer for as it’s dark operations are being exposed in broad daylight. The militarization of police forces in the United States is increasingly becoming an issue and when they base their prosecution models on that of the CIA, a not so reputable organization as it is. People are speaking out. They want to be heard. They want answers.