The Holocaust’s Hidden Stories of Jews in German Army 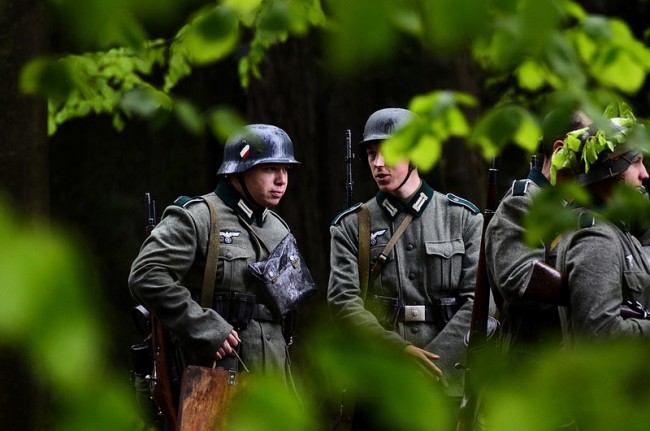 Last Thursday night, May 14, Roger Grunwald put on a one-man play about a largely unknown chapter of the Holocaust: the story of the tens of thousands of German men who were classified under the derogatory term of “mischlinge” (the term Nazis is used to describe those descended from one or two Jewish grandparents), and who served in Hitler’s Army during the war, and throughout the Holocaust. The play was performed at the Hilton Woodcliff Lake Amphitheater in Woodcliff Lake, New Jersey, and was sponsored by Eternal Flame, an organization that tries to promote awareness of issues pertaining to the Holocaust.

Years ago, Grunwald visited his aunt, Anne Bodenheimer, to talk about her experiences during the Holocaust, which included a stay at the Bergen-Belsen concentration camp. Grunwald’s mom had herself survived Auschwitz, and before she died in 2001, had requested that he find a way to use his background and abilities in theater to make sure people remembered what happened during the Holocaust.

He wrestled with some ideas, but one stood out in particular. His aunt had given him a book by Bryan Mark Rigg, Hitler’s Jewish Soldiers: The Untold Story of Nazi Racial Laws and Men of Jewish Descent in the German Military. This book focused on the story of part-Jews who served in the German Army during the days of Hitler, Nazism and the Holocaust. These men were known by the derogatory term “mischlinge,” and they numbered up to 150,000 during the Second World War. There were even an estimated 2,000 full Jews that served in Hitler’s army.

Grunwald started to create a one-man play focusing on the paradoxical story of these “meschlinges.” Once he felt that it was ready, he named it The Mitzvah, which literally means “The Good Deed.” In this particular play, Grunwald focuses on a few individuals, such as Christoph Rosenberg, a “mischlinge” with a particularly unique story. He was a half-Jew, but had reached the rank of lieutenant in the German army. Rosenberg’s character opens the play with Rosenberg’s dream of standing among the saluting throngs at a Hitler rally in 1939, before the war starts. Rosenberg dreams of killing the Fuhrer, and ending the war before it begins; even though he knows that he will be captured in the process.

Grunwald also incorporated another character, Schmuel Berkowicz, into the play. Berkowicz is a Jew from Bialystok, Poland, and is seen begging for mercy at Auschwitz. Grunwald also incorporated a comedic character to interject with commentary throughout the play. For the second half of the evening, following the play, Grunwald took to the podium and talked with the audience about this strange chapter in history. He appeared eager to get the thoughts of those in attendance, as well. He clearly was strongly influenced by the work of Bryan Mark Rigg on the fascinating topic of part-Jews serving in the army of the Third Reich as the Holocaust was taking place.

Indeed, it is a fascinating and surprising story. Among the thousands of part-Jews who served in the army under Hitler during the Holocaust, there are some surprisingly prominent individuals. The most famous example is that of Field Marshall Erhard Milch, whose father was Jewish. Yet, even when on the verge of being outed, Grunwald mentions that no less of an authority than Hermann Göring interceded on his behalf. Yet, he was not the highest authority to grant such exemptions to Nazi Germany’s traditionally strict racial purity laws. Hitler himself signed documents that granted certain individuals Aryan status, although Grunwald also mentions that there was a special clause that would have allowed the Nazis to reverse these exemptions after the war, if Germany had won.

In fact, there were thousands of part-Jews who were permitted to fight for Nazi Germany, and some of them were astonishingly visible in the public eye. Werner Goldberg was one such German who was of half Jewish ancestry, as his father was a Jew. His mother was German, however, and since the infamous Nuremberg Laws of 1935 required someone coming from a Jewish mother to officially be labelled a Jew, Goldberg was able to obtain “Aryan” status. Goldberg served as a soldier for Nazi Germany, and his image was published in the Berliner Tagesblatt, where he was described as “The ideal German soldier.” That same image of Goldberg was later used for recruitment purposes for the Wehrmacht, even though the same man who was literally the poster boy for the Aryan cause was, in fact, part-Jewish himself.