Apple Inc.’s iPad Is With a Patient on Her Way to Recovery 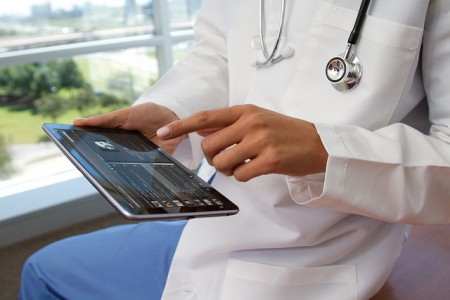 Apple Inc.’s iPad is being subject to a significant role, as it is with a patient on her way to recovery. Mike Wuerthele, a MacNN and Electronista editor said his wife suffered a stroke in the middle of this month (June) and was soon after transferred out of the emergency room and taken to rehab, where she is starting to recover. In this trying time, Wuerthele shared what he, his wife and their family are going through and shared her journey to recovery via the iPad, the technology she is using.

Wuerthele’s recollection describes his 44-year-old wife having a stroke on Sunday, June 28, after which she spent a few days in a mainland hospital, upon which time she was moved to a rehabilitation center. Following this, the couple’s life was a whirlwind of physicians, nurses, therapists and more testings. Along the way, everybody asked them “do you have an iPad?” Wuerthele wondered why at first, but shortly discovered how well Apple Inc.’s iPad, as well as other offerings in the tablet, integrate into medical recovery.

The first hours after the stroke involved less difficulty, as the pair walked into the ER and assessment area. The temporal lobe, as well as nearby areas on the right side of Wuerthele’s wife’s head were severely damaged; this resulted in disrupted vision, motor skills and short-term memory on the left side of her body. She is struggling with what she calls “broken brain,” which the couple acknowledge as a mental and physical problem.

The pair had a trip to the occupational, physical and speech therapy branches, which is what stroke victims generally need. Most branches involve some visual or cognitive processes to assist the examinations, as the hospitals have index cards and other materials similar to the decoration in grade schools.

Wuerthele admits he is a big fan of Apple Inc., one who is familiar with the tech company’s fondleslab, and also having children who use it. Their family uses it for their first child, as well as for keeping up with the dexterity fingers of the old folks. Hence, the man’s family is already familiar with therapeutic apps. They use apps on Windows, as well as those of Apple Inc.’s iOS and OS X for their disabled oldest child to help her along.

In his post at MacNN, Wuerthele talks about how the mainstream Apple press touches only “limited sanity,” when in fact, Apple Inc.’s iPad is with his wife, a patient on her way to recovery. He feels the iPad news coverage only serves to address the modest needs among the writing crew. Thus, he started to launch a column on the website to cover what is more of the iPad, and promises to give updates on what they are using with the tech tool. This includes what has been recommended, what are those that work, and what are not, as “every stroke is different,” according to the man and his wife.

iMedicalApps website has listed a compilation of the medical apps running on Apple Inc.’s iPad which can be very useful for healthcare professionals. They have chosen the top 10 most useful medical apps in Apple Inc.’s computer tablet as deemed by the website’s editorial staff, instead of the most downloaded ones.

Medscape tops that which can found on the free iPad version, which has been downloaded half a million times and more. It contains news, interaction checker, CME education, as well as comprehensive search function; the latter can provide information in a breeze, such as a searched drug, and how to do a lumbar function. It also is capable of looking up herbal drugs, as well as offline access to its contents – something that is useful to those who do not have Wi-Fi connection, or to that of a wireless plan.

MicroMedex is another medical app, an amazing prescription drug reference tool. It does not require any registration and its user interface is easy to use and clean. It is the best app to medical institutions and its popularity among pharmacists has soared due to its surplus of knowledge, such as that of Clinical and Toxilogy sections.

As well as this, there are also Draw MD series; these include Cancer.net, InMotion 3D, AHRQ ePSS, Radiology 2.0: One Night in the ED, free iBooks, Upper Respiratory Virtual Lab and a lot more. Mike Wuerthele still has to inform tech savvy individuals on how Apple Inc.’s iPad is with the aforementioned patient, his wife, on her way to recovery; and, with many medical apps in the computer tablet, it may really have a lot of things to offer to both patients and healthcare professionals.

Sources:
iMore: iPad and how it can aid in medical recovery
MacNN: Technology in Recovery: Out of the ER, into the fire
iMedical Apps: Top 10 free iPad medical apps for healthcare professionals

5 Responses to "Apple Inc.’s iPad Is With a Patient on Her Way to Recovery"