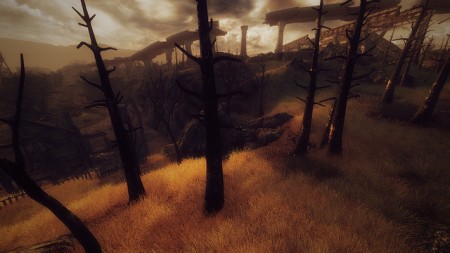 Bethesda Softworks’ new Fallout 4 has revolutionary features, according to Digital Trends. This new title is premiering soon, and predictions are looking good for the software publisher. News surrounding the highly anticipated Fallout 4 has been buzzing as the November release approaches. The News Hub says this title looks “…incredibly promising.”

The original Fallout sparked the series’ success with an 8.8 rating stemming from 900 reviews. The first RPG takes place in a post-apocalyptic future. There are 1,000 people crammed in a fallout shelter, and rations are starting to run low. People from the shelter have been sent out before on scouting missions, but none have returned; now, someone has been chosen to go find supplies. The user must fight off gangs, mutants, and whatever else has spawned out there in order to save the shelter.

The newest installment of the Bethesda Softworks series starts off in a world destroyed by a nuclear war. The user is the sole survivor of Vault 111, and his job is to rebuild the Wasteland. It kicks off in Boston just before the bombs begin to fall, according to Digital Trends. The review also states that while this is the same starting point as the third installment, the world looks very different.

One of the new features of Bethesda Softworks’ Fallout 4 will be the interactive dialogue, according to Dave Thier of Forbes. The website continues to state that the Fallout series has always had mute characters, which affects how involved the user feels. The theory is that a character without a voice allows the player to project himself more on the character, and thus, feel more engaged in the game. However, Thier argues two-way dialogue in an open world game feels more realistic, which can be seen in The Witcher 3.

Bethesda released a gameplay demo for the highly anticipated Fallout 4. It includes features such as character customization, companions for the user, a look at the new world, and how the game actually plays. These new gaming abilities are far more advanced than that of previous versions. Digital Trends states character customization includes highly specific variations of facial structure, hair style, and skin tone. In addition, the new dog can receive context-based commands. This translates to users being able to point to an object to retrieve it.

Another one of Bethesda Softworks’ Fallout 4’s revolutionary features is the use of mods. Xbox One is the first console to allow user-created mods. Users will be able to play Fallout 4 using mods created from the PC version, according to Digital Trends. The article lists other new features, such as settlement building. In the newest version of this series, one can construct buildings and hook up electronics. This is apparently necessary because the player’s buildings will be raided from time to time.

In addition to the new Fallout 4 console game, Bethesda Softworks has also developed an app called Fallout Shelter. In this game, the user controls a shelter vault from the gaming series. The goal of this app is to maintain the shelter, as well as to keep the residents happy. According to Game Informer, the user will buy residents items, build them rooms, and defend the vault from outside attacks. Also, in order for the shelter to grow, the residents will need to reproduce. The website also states that while the game is only available on iOS as of now, it will eventually be offered on the Android system.

Critics and reviewers have given high praise to Bethesda Softworks’ Fallout 4 and its revolutionary features. This highly anticipated title will have user mods, context-based commands, and user-controlled dialogue. For gamers interested in experiencing the newest installment in this series, Wired states that the release date was announced at the E3 expo as November 10.

Sources:
Forbes: The One Feature in ‘Fallout 4’ that Totally Changes the Game By Dave Thier
Wired: Apocolypse Almost Now: Fallout 4 will Drop in November By Chris Kohler
Digital Trends: Fallout 4 is Packed with New Features, and Brings Mods to Xbox One By Brad Bourque
The News Hub: Bethesda Softworks shows high hopes for ‘Fallout 4’ By Can Hoang Tran
Game Informer: [Trailer Added] Fallout Shelter-Management Mobile Game Out Now On iOS