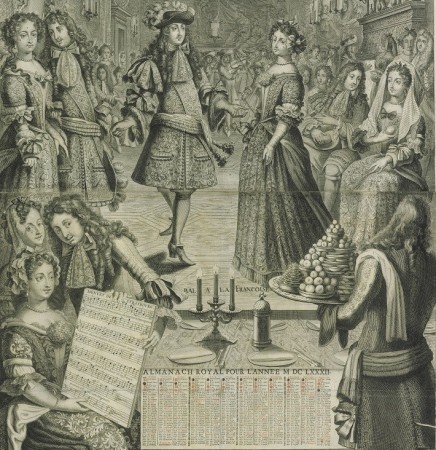 Promotional posters, billboards and calendars are commonplace today, but a new museum exhibit shows how prints made in 17th Century France promoted government activities, royal doings, the latest in fashion, and more. The exhibit, entitled A Kingdom Of Images: French Prints in the Age Of Louis XIV, 1660–1715, opened today at the Getty Research Institute in the Getty Center and will be in Los Angeles until Sept. 6, 2015.

Louis XIV, the Sun King, was known for his imperialist ambitions, extravagant court, and building boom that created or enhanced the Louvre, the Church of the Invalides, and the palace and vast gardens at Versailles. His ambitions were evident in every activity in his kingdom, including production of etchings and prints to commemorate them (and honor him).

Valuing the beauty and advertising use of prints, Louis XIV and his court transformed Paris into a printmaking center and commissioned countless works for distribution as royal gifts or by the hundreds as promotional materials posted throughout the countryside. The best printmakers received commissions and considerable compensation for their efforts. The art of printmaking that he helped elevate is not as widely known as a media, but the detailed etchings, intricate designs that convey what was going on in the country and court were the social media of the day.

The Kingdom of Images exhibit featured approximately 100 works culled from and organized by the Getty Research Institute and the Bibliothèque nationale de France. Timed to commemorate the 300th anniversary of Louis XIV’s death, the exhibition explores the vast variety of print themes and styles the King used to promote court activities, battle victories, the latest in architecture and decorative arts, and new French fashions (yes, even then).

The art form of printmaking employed copperplates, engraving tools, ink and paper. The etchers and engravers developed original works as well as reproductions of paintings and tapestries. The composition was transcribed onto a copperplate, which was then run through a printing press to produce hundreds and even thousands of impressions. Some are in color, which was painstakingly painted in later on each one.

The first part of the exhibition contains illustrated calendars or almanacs showing the king in various roles (warrior, danseur, diplomat) that convey what happened the prior year. Each has a calendar section and a variety of images that tell about the prior year. Later in the exhibition, there is also a turn of the century version from 1700 that shows the great wars, scientific discoveries, art, events and, of course, royalty in the previous 100 years.

The fashion section shows examples of images developed to show the latest couture styles in the court and elsewhere, serving as early fashion ads. Two works included at the Getty exhibit are prints where the figures’ engraved clothing images was replaced with real fabric from the late 1600s. These “dressed prints” are very rare and fragile, with reportedly only six sets remaining in the world.

In the architecture and decorative arts area, there are tremendous prints of the grounds of Versailles and the Church of the Invalides. These prints required many copperplates that printed sections that were then put together. Some unfolded from books like a1680s version of a road map or pop-up book.

There are also prints showing cabinet work from Andre-Charles Boulle (1642-1732), whose marquetry – applying precious woods and metals in decorative patterns to embellish the cabinet panels – established a style known as Boulle marquetry ever since. Back in Boulle’s day, most furniture makers did not publish their designs to avoid copycats. Boulle, however, made a exception and allowed some prints to be published that promoted his designs. This was shortly before he retired and handed his workshop over to his sons, so they were probably intended to ensure new orders came in for future work.

Louis XIV respected the power of printmaking. He bestowed on the engravers and printmakers the privileges enjoyed by painters and sculptors, who were considered fine artist. So, why is the art form not as widely known?

One theory “is that curators and scholars dismissed many of the prints as propaganda, the kind of over-the- top imagery in which the king appears, for example, as a mythological figure or a Roman emperor,” according to the Getty’s Louis Marchesano, one of the exhibit’s curators. “While I do not disagree with the “propaganda” label, I would urge viewers to consider the sophistication of both the message and the way that message is delivered.”

Whether promotional pieces or not, the French prints at the Getty depict the lengthy reign of Louis XIV and his time period. This was the period Louis, with the help of his prints, made France a leading center of fashion and design.

Sources:
Visit to the Kingdom of Images exhibit at the Getty June 15, 2015
The Getty Center: The Getty Research Institute