Donald Trump Demands to Be Commander-in-Chief 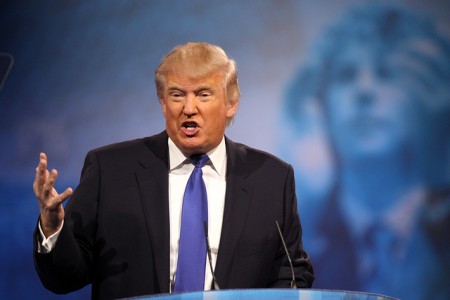 Donald Trump demands to be commander-in-chief, according to a loose interpretation of his recent announcement to run for President, made from the Trump Tower skyscraper in New York City. The idea that money can buy everything has never been as put to the test as it will soon be.
Trump enters a crowded GOP filled with oldies but goodies, if one is into that sort of thing; such as Jeb Bush, Rick Perry, Lindsey Graham, George Pataki, Rick Santorum, Bobby Jindal, Mike Huckabee (again), Ben Carson, Marco Rubio, Rand Paul, Ted Cruz, Chris Christie, Scott Walker, Mitt Romney, John Bolton, John Kasich, and two women, Carly Fiorina, Sarah Palin.

Trumps’ qualifications include, of course, his proven skills to make money which he intends to apply to the American brand, so that as a country America will enjoy more wealth. As a real-estate mogul, reality tv show host of The Apprentice, and as an individual with a well-marketed brand, he seeks to outdo the HOPE movement, the “Clinton machine” and to exude power, wealth and hair into the 2016 presidential race. Trump, who allegedly has a net worth of $8.7 billion dollars, is viewed as cocky, aggressive, disrespectful and fierce. Perhaps a little fierceness from elected leaders is what America needs to get ahead; however, pollsters know that candidates want to be seen as approachable, likable, even endearing but never volatile or violent. There are many people who can make great policy yet do not have the personality or skills to get elected; conversely, there are people with the charm, celebrity status, and money to get elected who do not have the skills to make policy – the 69-year-old is in the latter category.

The presidential candidate, according to a recent Quinnipiac University poll, is disliked by 70 percent of voters on the whole, and by 52 percent of Republican voters. Although Trump would make for excellent entertainment in the 2016 contest, his bid for the presidency is a very long shot at best. An additional challenge for this contender, as he faces a changing American population, is that Americans crave variety and another white rich older male does not offer that diversity in candidates that young voters, latinos, and other growing demographics seek.

Trump, as this tweet from his account illustrates, is a climate change denier, “The concept of global warming was created by and for the Chinese in order to make U.S. manufacturing non-competitive.” Additionally, he is a believer of the Mexican-American border wall and a promoter of the Obama birther movement, Trump sits on what much of America believes is the wrong side of the fence – no pun intended. Trump claims that in a time of too much “politics” in politics, what is needed is someone that has proven they are successful as not just a politician. His inexperience as an elected official is the track record he seeks to run on in this election. While most Americans believe there is too much partisanship in the current federal government and recent election, the future discourse about America is unlikely to be raised by Mr. Trump who, has said and tweeted things like, “Why is Obama playing basketball today? That is why our country is in trouble!”

If Trump demands to be commander-in-chief, as he demands most of the things he gets, he will find that courting the American people will require more tact and sensitivity than what he has demonstrated thus far. Democrats are unified in a bittersweet sentiment as Trump joins the race for commander-in-chief, as they demand a high-level policy discussion that will be distorted by Trump. On the other hand, if America loves reality shows, then Americans are in for a ride of their lives that will feature the most hotly watched entertainment show, which will sadly conclude by affecting the real lives of all Americans.

The Atlantic – The 2016 U.S. Presidential Race: A Cheat Sheet

The New York Times – Donald Trump Runs for President (This Time for Real, He Says)

One Response to "Donald Trump Demands to Be Commander-in-Chief"