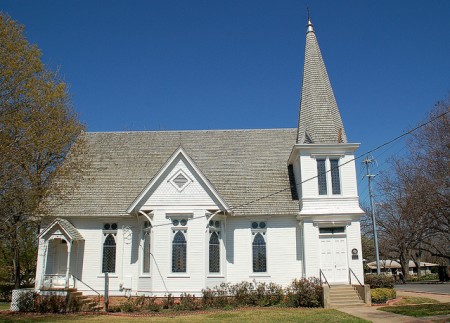 Roy Moore is an avid church-goer, representing his Christian faith and spreading the word of the bible to whoever will listen. He is preaching his Christian faith, when he is supposed to be following the judiciary system and obeying laws. He is the Supreme Court chief justice in Alabama, who swore under oath to uphold the law. Following the results of the Supreme Court of the United States’ ruling in favor of same-sex marriages, Chief Justice Moore became more of a Christian disciple than a leader of the court.

Throughout history, there have been couples who have not followed the same path as everyone else, and who were associated with being different or having evil tendencies. However, there have been no proven tests that can lay a foundation for these accusations.

Moore stated at the Kimberly Church of God, “Welcome to the new world. It’s just changed for you Christians. You are going to be persecuted, according to the U.S Supreme Court dissents.” When speaking to the congregation on Sunday, June 28, Moore made his opposition to the Supreme Court ruling very clear.

Quoting scripts from the Bible, he spread thoughts of sin being converted to a national right. This holy roller has the audacity to speak of Christianity as though he is being told information specifically from Jesus himself. It is one thing to have an opinion on certain subjects, but to create controversy and try to scare Christians into following his thoughts is not right.

A Supreme Court chief justice who vows to uphold the law, but then fails when the law challenges his religious beliefs is unjust. In February 2015, Moore instructed the lower courts to not supply marriage licenses to same-sex couples, stating that they are not in the same judicial branch as the United States Supreme Court. He is sadly mistaken on this fact, because in the United States Constitution it states that all state courts will be ruled by the Supreme Court.

Moore seems blinded by his outrage over the court ruling. He is lost in his religious beliefs, and can no longer uphold the laws he swore to protect. By segregating the rights of lesbian, bisexual, gay, and transgender (LBGT) individuals, Moore is neglecting his duties as an officer of the court and judiciary system.

If Moore read the Bible, he would read the following in 1 Corinthians 6:9-10, “Do you not know that the unrighteous will not inherit the kingdom of God? Neither the immoral nor idolaters nor adulterers nor sexual perverts nor thieves nor the greedy nor drunkards nor revilers nor robbers will inherit the kingdom of God.” This refers to many Americans, including all those individuals who are in the United States prison system, among others who are not. However, it does not specifically imply lesbian, bisexual, gay or transgender individuals. Perhaps Moore should write his own Bible, based on his views and interpretations as he acts as a Christian disciple.

Even though not all states agree with the Supreme Court’s ruling on same-sex marriage, some have accepted that it is now a law, and therefore must be upheld by their judiciary system. Nebraska Governor Pete Ricketts stated after the ruling, “We will follow the law and respect the ruling outlined by the court.” It is not one man’s decision or right to portray the law as he feels fit, but to respect the law and follow it as others do.

Lesbian, bisexual, gay, and transgender people may also follow a certain religion, even perhaps the same as Moore, but there is no judgment day until they are no longer living. Moore simply cannot be the judge, jury, executioner, and disciple of Christianity all at the same time.

Al-Roy Moore on gay Marriage ruling: ‘Christians are going to be persecuted’
CNN: Alabama chief justice: Marriage ruling worse than segregation decision
Bible: Will adulterers go to hell as it says in 1 Cor. 6:9-10?