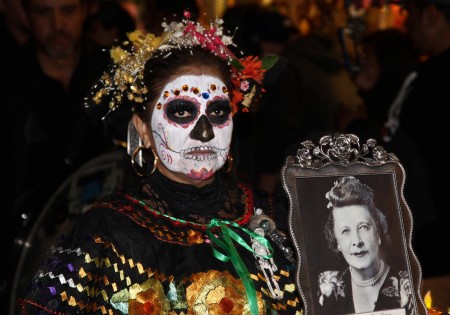 The new James Bond film is set to release Nov. 6, 2015. With the release still months away, a Spectre vlog is giving a unique insight into the story and making of the film.

The Urban Dictionary defines a “vlog” as a video journal. It documents the subject’s thoughts and actions in order to share them on the Internet. The cast and crew of the new film, Spectre, have been creating a vlog to clue fans in along their journey.

In the latest entry of the Spectre vlog, the team is filming in Mexico during the Day of the Dead celebration. During the video, the team comments on the massive amount of people gathered in the streets. They also remark on how helpful the community was during the filming.

In another installment of the Spectre vlog,  a car chase is highlighted. The film uses eight specially-made Aston Martins, a car associated with James Bond. The car chase takes place on the streets of Rome, which were emptied for the filming. In the chase, the villain’s car is a Jaguar. The cast notes that these are two of the fastest cars in the world.
The first video in the vlog documents the team working on the snowy mountains of Austria, which is said to be the site of one of the major action scenes of the movie. Cast members claim the weather and altitude made it challenging, but that the scenery was worth it.

In director Sam Mendes’ vlog entry, he explains that this time, “Bond is on a mission from the beginning” of the movie. Mendes wanted to develop all of the characters more deeply. The supporting roles all put their lives on the line to help Bond. Mendes comments on the fact that this time, Bond is the one with more experience. This series of Spectre vlog installments have helped give unique insight to the film while keeping much of it secret.

An article by Vine Report claims Spectre is supposed to be an extremely visually stimulating experience. From the opening Day of the Dead scene on, this film is said to be action-packed.

Mirror explains that Mendes is returning after his success with Skyfall. In fact, they note that much of the team from the last Bond film is returning for this film. With the death of Judy Dench’s character, Ralph Fiennes will step in to play M. Mirror reports there will be new Bond girls, Nicole Harris is back as Moneypenny and Ben Whishaw returns to play Q.

Mirror also relays that filming began late in 2014 and will take place in five countries around the world. The vlog captures the team’s experiences in many of the locations. The vlog videos can be found on the official 007 website as well as on Youtube. The entries are short; no more than two minutes long, and give the audience a quick glimpse at the action.

Currently, the U.S. release date for the film is Nov. 6, 2015. In the meantime, fans can get unique insights on the making of the film by visiting the Spectre vlog.

Mirror-Bond 24: Everything We Know About the New James Bond Film Spectre