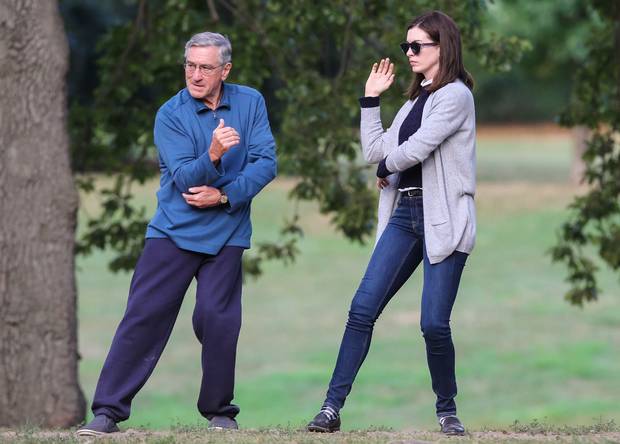 The movie The Intern, which is currently set to release on September 25, 2015, brings together two award-winning stars, Anne Hathaway and Robert De Niro, who seem to work very well together on the big screen. Written by Nancy Meyers, who also wrote Something’s Gotta Give and It’s Complicated, the show was bound to be a heart warming flick, but as Hathaway and De Niro do an excellent job of bonding on the set, they really bring out the sentiment in the movie. (The female part was originally going to be played by Reese Witherspoon, according to sources.) De Niro’s character is a man in his 70’s who becomes a Senior Intern, under the much younger CEO and founder of a fashion website, Hathaway. The movie becomes a humorous play on the generation gap in the work field, and many jokes on such are included in the movie. Slowly, but surely Hathaway’s character begins to lean on De Niro’s character, later calling him her “intern slash best friend.”

After Ben Whittaker (Robert De Niro) is hired to work for Jules Ostin (Anne Hathaway), his presence as the Senior Intern becomes somewhat of a joke, as other employees of the company, and CEO Ostin, feel that De Niro’s character would not work well at the office, given his age. This is especially clear when the clip shows the person who hired Whittaker, defining the Senior Intern program. Ostin asks if the Senior Intern program meant seniors in college or seniors in high school only to get the reply that the program meant “seniors in life.” Whittaker’s experience, in his career and just in life, slowly begins to unveil itself, as he gets to know the employees. Whittaker’s coworkers begin to see something in him that draws them in, and apparently those higher up in the company than Ostin began to see something in the older generation as well. 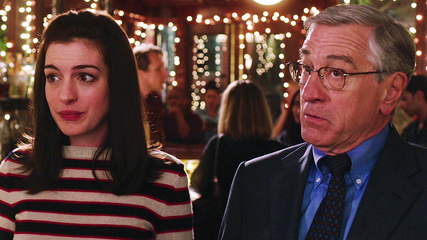 In the preview Hathaway starts out on top, seeming to have everything, until in one clip it looks as though the company is looking for a “more seasoned CEO.” Hathaway’s character is seen in tears in the next clip, and following clips show De Niro’s character giving Ostin words of advice and providing her with inspiration and compliments. In all of Anne Hathaway’s and Robert De Niro’s scenes together, from what viewers have seen of The Intern so far, seems to prove that the two work very well together on the big screen. Others also worked very well together in order to produce this possibly award-winning movie.

Writer Nancy Meyers and Warner Bros. Pictures teamed up with the award winning cast in order to create The Intern, and as a movie that combines humor and sentiment, the movie is expected to do well at the box office. As it does not come out until September, it will not be known until then if the movie becomes a big hit or a flop, but as Meyer’s movies have done pretty well in the past, it may just find success. As other movies like Hotel Transylvania 2 (a kid’s movie), Before I Wake (a supernatural thriller), and The Disappointments Room (a psychological thriller) are all set to release on the same day as The Intern, the movie will certainly have some competition.