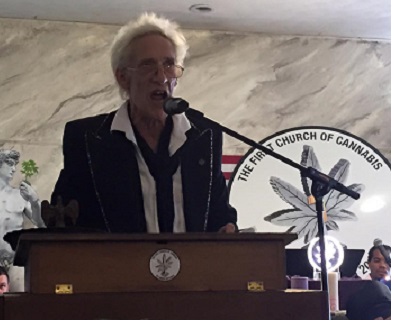 The First Church of Cannabis held its first service in Indiana on Wednesday, July 1. The “Grand Poobah and Minister of Love” at the church is the self-described Bill Levin. He was received by the attendees to thunderous applause. It is no coincidence that the first service was held on July 1; this is also the day the Indiana Religious Freedom Restoration Act took effect.

The church, also known as the Cannaterian Church, is growing quickly and has more than 1000 members across the globe. Reportedly, they share one of the oldest religious sacraments worldwide and played a prominent role in the history of unorthodox religions. The intention of this religious organization was “to start a church based on love and understanding with compassion for all which is built on LOVE and FAITH with the plant we know and love.”

Its members boast of the “no judgment” environment and welcoming spirit immediately recognized upon entrance. The main doctrines of the church are called pathways. The pathways identify cannabis as a gift from a supreme power for the betterment of mankind. Cannabis, according to the church’s creed, brings people closer to themselves and one another and is the fountain of love and health, bringing healing and deliverance from depression and illness. When referencing Cannabis, the church’s mission statement reads:

Cannabis, ‘The Healing Plant’ is our sacrament. It brings us closer to ourselves and others. It is our fountain of health, our love; it is curing us from illness and depression. We embrace it with our whole heart and spirit, individually and as a group.

The service streamed live across the world. The atmosphere was charged with a spirit of love and acceptance. The minister of music opened the service with songs of celebration. De-Rock told sang and encouraged the audience.  He acknowledged his love for Jesus and said, “He saved my life.” Jokingly the singer said he had no idea agreeing to do the music for the First Church of Cannabis would get him kicked out of his family. De-Rock said:

My family is filled with theologians and this service is all about love and spreading the gospel of love. We are taking them higher in the name of love, one love.

The Grand Poobah entered the service immediately following the worship portion and introduced a prayer consisting of three words, “I love you.” His instructions to the congregants were to say, “I love you” three times, turning in a new direction to face a different individual each time. The entire service followed the church’s mission of spreading love and acceptance. 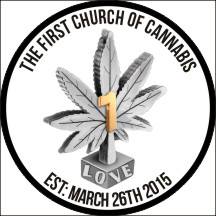 Next the Minister of Love introduced the testimony portion of the service. He told the congregants that this church does not believe in judgment, it believes in celebrating life’s great adventure. He admonished the people to celebrate each testimony because “it feels so good for love to be returned as love is given out.” Several people took to the podium to share ways their life is being positively impacted by the healing plant Cannabis. Many said they would rather smoke weed than take pills any day.

One attendee said she has several diseases and has visited multiple specialists in efforts to regulate her pain. She found no hope until she tried cannabis.  In three months, medical marijuana has totally alleviated her pain. The woman said she has worked hard, raised her children and just wants to live. She is not a criminal and needs the government to help her live. She ended her testimony with:

Let’s increase our love and work on these laws.

The congregants prayed for miracles of healing and health and wanted those miracles to spread throughout the world. An ordained minister got up and shared what he witnessed in the service. He stated:

When I look at the Jesus who went among the least of these people here, we are living in love. When Christians have a problem with the least of these, I bet God has a problem with them. The world is trying to criminalize something natural while America is going to hell in a handbasket. It’s not right to make a plant that is grown on this great earth illegal. It is time to legalize it!

Yesterday marked the first high holy service for The First Church of Cannabis. Bill Levin, the founder, said the church was formed to show a proper way of life and a loving way to live it. The Grand Poobah said if someone smokes in church, “God bless them.” The First Church of Cannabis is a result of Indiana’s relaxed religious freedoms with a law that limits the government’s ability to impede on one’s religious beliefs without a compelling interest.

All photos courtesy of The First Church of Cannabis