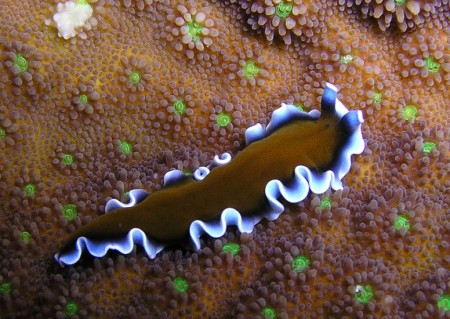 Scientists have found a species of flatworm that has an interesting needle-like penis that can stab its own head to inject sperm in order to reproduce when a female companion is not available during mating season. According to a new study conducted by researchers from the University of Basel in Switzerland and the University of Bielefeld in Germany, the Macrostomum hystrix species of flatworm has one of the freakiest sex lives ever seen in the animal kingdom. The study was published in the latest issue of the journal Proceedings of the Royal Society B,

Evolution has given some very peculiar characteristics and traits to Earth’s fauna. However, this aquatic animal’s bizarre mating ritual involves asexual reproduction, something that has typically been seen in single-cell protists and bacteria. The new study shows that when the flatworm is unable to locate a mate, survival techniques come into play and the aquatic worm will stab its own head with its needle-like penis and inject sperm so that procreation is possible.

The hermaphroditic sea creatures are about 1.5 millimeters long, according to examples provided to the study. To see how this occurs under controlled conditions, the researchers took 50 worms and kept them in isolation from each other for a period of one month, and 50 others were kept in groups of three for the same length of time. At the end of the study, the lonely flatworms had a larger quantity of sperm in their head than did the ones with company.

Steven A. Ramm, an evolutionary biologist and lead author of the study, stated although the freaky sex act may look horrific and very odd, based on evolution, it is their best option for the survival of the species. “The alternative is not reproducing at all, so it’s making the best of a bad situation,” he said.

During the annual mating season, which is just two to three weeks long, the flatworms mate for up to 14 hours a day, using the other hours in the day searching for food. Even though Flatworms are known to engage in this gruesome sex act, they stab themselves in the head with their needle-like penis when that is the nuclear option. Scientists call this act “selfing.” This act is also said by scientists to cause a less genetically diverse species.

These types of flatworms are known in the animal kingdom for their large genitalia. The testes on the Macrostomum hystrix can be up to 15 percent of its body size.

As a result of the study, the researchers found that some of the transparent flatworms did not have an organ in the rear section of their bodies to store sperm, but had collected all of its sperm near their head cavity. Male flatworms have a needle-like penis that acts almost like a hypodermic-type of injection of sperm into its head to reproduce.

Since this type of aquatic worm is hermaphroditic, the body of the animal is also home to eggs. When the organism stabs its self in the head, sperm are released into its body, and travel towards where the eggs are stored. “As far as we know, this is the first described example of hypodermic self-injection of sperm into the head,” said Ramm.

Huffington Post: Aquatic Worm Species Can Inject Its Own Head With Sperm To Reproduce, Scientists Discover

CNET: This flatworm’s freaky sex life will freak you out