HBO’s ‘Packed in a Trunk: The Lost Art of Edith Lake Wilkinson [Preview] 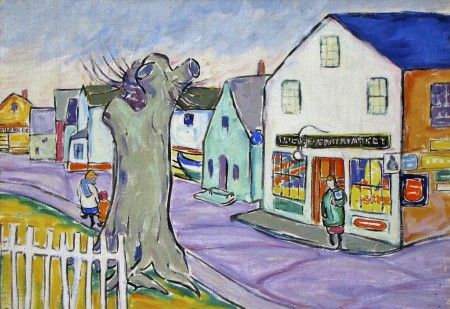 HBO’s Packed in a Trunk: The Lost Art of Edith Lake Wilkinson, a documentary about the life and art of the fascinating and amazing artist Wilkinson, will air on July 20. It is sure to be an intimate portrayal about her, as well as raise several questions about topics like the way that society once viewed people who seemed to be different, and who were at their happiest in a same-sex relationship. In Wilkinson’s case, she went from being on the verge of fulfilling a promising career as an artist and living with her close friend, Fannie, to being committed to the Sheppard Pratt Hospital in Baltimore, a sanitarium for the mentally ill, by her lawyer, in 1924.

The story of the life of Wilkinson was one very close to the heart of Emmy Award-winning writer and director Jane Anderson, the woman who tries to unravel the mystery of Wilkinson’s buried life, return the work to Provincetown, and have her contributions recognized by the art world, in the HBO documentary Packed in a Trunk. Anderson is the great-niece of Wilkinson, and she grew up surrounded by Wilkinson’s paintings. She is also, like her relative, in a happy same-sex relationship, making the plight that befell Wilkinson that much more personal and poignant to her.

Born in 1868, Wilkinson was a native of Wheeling, West Virginia. She had a fiercely independent nature, moving to New York by herself in 1888 at the age of 20. There, she decided to pursue a career in art, and studied at the Art Students’ League. During the next 30 years, Wilkinson lived with a woman named Fannie on the upper west side of New York, made trips to Europe, and eventually became a part-time resident of Provincetown, Massachusetts.

Then, Wilkinson’s life, as detailed in the HBO documentary, began to spiral downward, largely due to the actions of her lawyer. Connections with her family had been cut, as Wilkinson’s older sister had passed away years earlier and both of her parents had died under suspicious circumstances. There were some people who thought that Wilkinson’s relationship with her friend, Fannie, was scandalous, or even a sign that she was mentally unfit.

Wilkinson’s lawyer had her put away and then he went to work, siphoning off her funds. He seemed to show his true colors, being more concerned with enriching his bank account than about Wilkinson’s health and welfare. Her paintings were packed up into trunks and shipped off to her nephew in West Virginia. There, they sat and collected dust for four decades. Nobody heard anything about Wilkinson ever again.

Anderson, who is the co-writer and executive producer of the HBO documentary, Packed in a Trunk: The Lost Art of Edith Lake Wilkinson, felt that the story of her great-aunt’s life and art was one that was compelling and well worth telling. She grew up very much influenced by Wilkinson’s brilliant, light-drenched canvasses, and sense of artistic style.

Before she became a writer and director, Anderson moved to New York, like her great-aunt had done, and became a successful artist there. For decades, she has wanted the art and life story of her great-aunt to gain greater recognition, prompting her to finally have a documentary made about Wilkinson, directed by Michelle Boyener, with Tess Ayers, her spouse, as a co-executive producer.

Anderson has had the good fortune of being surrounded by her family and friends and doing work that she enjoys, like writing the critically acclaimed HBO mini-series adaptation of the novel, Olive Kitteridge, starring Frances McDormand. Among her other accomplishments, she received an Emmy for HBO’s The Positively True Adventures of the Alleged Texas Cheerleader-Murdering Mom, and she wrote and directed The Baby Dance, adapted from her play, for which she received a Peabody Award, and Golden Globe and Emmy nominations for best writing and made-for-TV film.

HBO’s Packed in a Trunk: The Lost Art of Edith Lake Wilkinson, which will air on HBO on July 20, will be about the life and art of a fascinating artist and person who went from almost having it all to being committed to a mental institution and largely forgotten. From the early buzz already being generated about the documentary, it looks like it will be a thought-provoking glimpse of the artist’s life and art that will raise many issues and will likely earn Anderson, Ayers and Boyener even more awards.

2 Responses to "HBO’s ‘Packed in a Trunk: The Lost Art of Edith Lake Wilkinson [Preview]"