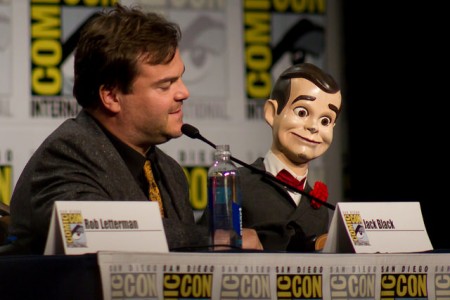 Shadoosh! it’s Jack Black starring in a spooky trailer for Goosebumps, playing R.L.Stine in the movie adaption of the author’s creepy series of children’s books. The star of School of Rock, plays the famed author haunted by his own creations. The Golden Globe nominee, who once donned wrestling tights in the touching comedy, Nacho Libre, said,“I play R.L. Stine who is not in any of the books, but he’s an essential character in this movie.”

The movie trailer shows Zach Cooper, played by Dylan Minnette, as a young boy who moves next door to Stine’s house, and befriends his niece Hannah, played by Odeya Rush. In a throwback to Jumanji, Hannah and Zach accidentally unleash all of the ghoulish monsters from the author’s Goosebumps library. R.L Stine’s tales of spooky peanut butter monsters and possessed dummies are what make campfire circles enjoyable. Every child and adult who has ever read one of the Goosebumps tales under their sheets, will look forward to seeing characters like the Abominable Snowman, and the possessed dummy, Slappy. 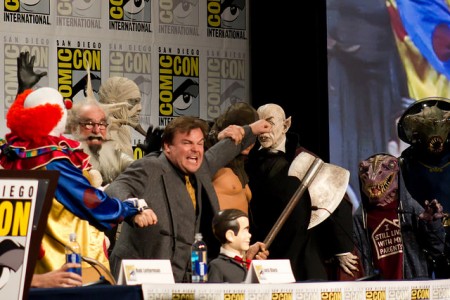 The movie’s director, Rob Letterman, Monsters vs Aliens and Gulliver’s Travels, which starred Black, includes 25 of the original haunting ghouls from the book. In the spooky trailer for Goosebumps, Jack Black plays the troubled R.L. Stine with his own brand of  humor and charm. Casting the funnyman as the ringleader of Stine’s circus of freaks and creepy crawlers, shows just how fun reading is if the right person is turning the pages.

When R.L. Stine yells, “you’ve just released every monster I’ve ever made”, he’s talking about 200 books worth of zombies, murder clowns and giant headed jack-o-lanterns. Scared yet? how can anyone be with Jack Black as the hero. With such a giant cast of creepy Halloween characters, Black is still the box office attraction. The comedy genius who has been compared to the likes of the late John Candy and John Belushi, carries the weight of all his movies like balloons filled with helium laugh gas.

What other way can a best-selling author promote his books than peeling them off the pages, as seen in the trailer that shows the words of one of his manuscripts exploding into the air, as the books are unlocked. It is a scene that has probably sat in the writer’s head since he penned his first composition. Any one of his chilling horror stories such as Creep from the deep, Zombie School or Night of the Living Dummy 1-3 could play in any Grindhouse showing. Whether it is reading under the sheets or just passing the hour in a waiting room, the books are timeless and just plain fun.

Jack Black has played many characters, and in this spooky trailer for Goosebumps, channelling R.L.Stine might be a big stretch, but who cares, this is Jack Black. Judging by the trailer of the movie, blending the characters and words of the great R.L. Stine and Black’s charm and raising eyebrow, there’s much to look forward to. In Hollywood good writing makes a good movie, and what better way to do it than with the author with over 200 classic books on his shelf. Goosebumps will be released in theaters in Shocktober 2015.