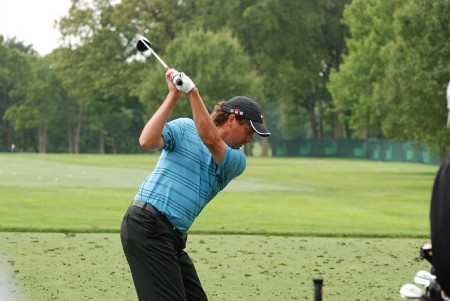 Jordan Spieth, just 21 years old, is driving for triple championships to complete the third leg of a calendar Grand Slam at the British Open. Spieth, however, may have problems at St. Andrews, because he did not have enough time to practice for this tournament after completing the last of the PGA tour, the John Deere Classic, which was where he won his first major title two years ago.

The British Open began July 16 and, with a win, Spieth could match the accomplishment of one of golf’s elite, Ben Hogan, joining Hogan as one of only two golfers to win the British Open, Masters, and the U.S. Open in the same calendar year. The young golf pro, who chose to stay to play in the John Deere classic, did not arrive at St. Andrews until Monday, July 13, and spent two days studying the course and all of its delicate details. Although he did, in fact, win the John Deere Classic in a playoff, he knew that having extra time to practice on the British Open course would have been a great idea. Even so, he believed winning a PGA tour event was also good practice for the Open.

Although he won the Valspar Championship in March, he did not win the Shell-presented Houston Open, which was played just before the Masters tournament. He did win the first major of the year, the U.S. Open, becoming the first wire-to-wire winner in almost 40 years. He had a double bogey late on the course, but he stayed focused and got a birdie on the 18th hole to win the U.S. Open. With the win, Spieth will be driving for triple championships with a win in the British Open.

With a lack of sleep, not much knowledge of the course, and a six-hour time difference, Spieth scored 5-under-par with a 67. Dustin Johnson, who finished behind Spieth at the U.S. Open, shot a 7-under par 65 in his opening round. The young golf pro had only played on the course once – four years before on an unplanned visit. The weather conditions were favorable on the course, which proved helpful for him as he scored quite a few birdies. In his first seven holes, he made birdies in five to score 5 under 31. Spieth became tied for the lead at the 11th hole when he shot another birdie. He did not shoot a bogey until the 13th hole, when he was at par 4.

Spieth’s motivation is Hogan, who, after surviving a head-on collision with a city bus, went on to defy the odds on the golf course and become the only golfer to win the first three major championships on the PGA tour. The young golf pro has himself defied the odds thus far. Despite his youth, Spieth does not like to be compared to Tiger Woods, saying he is not quite up to Woods’ level. The golf professionals have said that it is impossible for such a young guy to win on the tour, let alone win the Masters at such a young age. Spieth was also told it was impossible for him to win the first two majors of the year, and that it is impossible for him to win the John Deere and then fly to Scotland a few days later and win the British Open. Spieth has gone against the odds, just like his role model Hogan, so his quest to drive for triple championships may be possible after all.

Jordan Spieth Driving for Triple Championships added by Katherine on July 17, 2015
View all posts by Katherine →