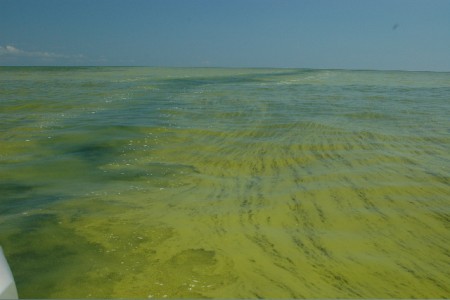 According to data from the National Oceanic and Atmospheric Administration (NOAA), Lake Erie will suffer a harmful algae bloom this summer, and may cause a public health crisis in the cities near the Great Lakes. Scientists claim this year’s algae bloom could be just second to one of the worst algae invasions that ever it the area, in 2011.

In August 2014, the western portion of Lake Erie was hit with a cyanobacteria bloom that crippled the water supply to over 400,000 residents in Toledo, Ohio. The bloom stretched for over 100 miles from Toledo to Cleveland.

Although the 2011 event was the largest, it did not cause health problems for the coastal cities. Therefore, scientists are still monitoring the drinking water supply in the area. In a statement from the NOAA’s National Centers for Coastal Ocean Science, ecological forecasting researcher Richard Stumpf stated, “While we are forecasting a severe bloom, much of the lake will be fine most of the time.”

The unusually arid conditions in April and May, along with heavy rainfall in June, allowed a record amount of runoff and nutrient discharges in Maumee River, which is near Toledo, NOAA officials stated. Scientists are concerned that the minerals in runoff from farmlands may contaminate the water with a growth of algae to a point where the water will be undrinkable.

Runoff dumps the remaining nitrogen and phosphorus from overfertilized fields, livestock fields, and damage waste lines into Lake Erie. According to a study conducted by Laura Johnson, a research scientist at the National Center for Water Quality Research at Heidelberg University, the three million acres of farmland leading from Toledo to Lake Erie have streamed nearly 2.5 million pounds of phosphorous down the Maumee River.

Currently, there is a light green bloom of algae forming in the Lake, and Toledo city officials have been urging the people that their drinking water supply has remained unharmed. Tests conducted on the algae shows no microcystin present, according to sources. This compound creates a threat to public drinking water, therefore, the algae has yet to develop into a harmful bloom. “All water-quality tests say non-detect in the water. The water is safe to drink,” city officials posted on Facebook this week to calm Toledo residents.

Scientists stated, fortunately, there is no correlation between bloom sizes and the toxicity of the water in an area where algae is present. Don Scavia, an aquatic ecologist at the University of Michigan, explained dangerous algae blooms are also based on natural factors like, “wind direction and water temperature.”

State authorities claim the best way to combat a growing algae bloom is for residents to avoid using more than the recommended amount of fertilizer or other substances in their lawns that are near creeks, rivers, and other sources of primary runoff. Moreover, homeowners should have between six and 10 feet of buffer zone around the edge of water where no fertilizer is used.