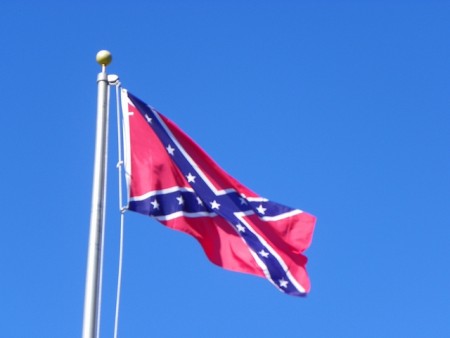 South Carolina’s flag debate is prompting a KKK protest in July. The white supremacist protest is one of the after effects of the massacre taking place in one of Charleston’s prominent black churches.

The Ku Klux Klan, which has largely been dormant in the South for decades, said it will hold a rally in Columbia on July 18. The point of the rally, according to the group’s leaders, is to show support for the Confederate flag. The group took issue with the Confederate battle flag’s removal from the grounds of the statehouse. The “Great Titan” of a North Carolina KKK chapter, James Spears, said the removal was “done for all the wrong reasons.”

According to South Carolina officials, the Loyal White Knights chapter of the KKK obtained permission to rally at the statehouse. Any group can get permission to hold a peaceful rally under constitutional rights. The chapter boasts to be the largest Klan group in the United States, but it is uncertain how many members are in the group.

The group is not saying much about Dylann Roof, 21, killing nine people in the Emanuel African Methodist Episcopal Church in Charleston, although Spears said he felt sorry for the young man. The group’s rally is concentrating on the flag issue and not the crime or Roof’s racism.

Calls for removal of the Confederate flag from the memorial located on the South Carolina State House grounds in Columbia came rapidly after the June 17 shootings in Charleston. Gov. Nikki Haley, a Republican, declared her intention to remove the flag from South Carolina state buildings while speaking at one of the funerals for the shooting victims.

Since then, calls have been issued to remove the battle flag from public places beyond South Carolina. Stores, including Walmart, announced they were pulling the flags from their shelves and will no longer be selling them and eBay made a similar announcement about its online store. The reaction to the shootings is the key factor in ongoing protests and the South Carolina flag debate which is prompting a KKK protest in July.

The irony is that one of the victims, State Sen. Clementa Pinckney, who also was the pastor at the Emanuel AME Church, voted in favor of the Confederate flag flying over the memorial. The bill was a compromise to remove the flag from the Capitol flagpole and fly it over the memorial instead.

The lobby to remove the battle flag has many across the South bothered because, according to them, the flag is more about Southern culture than racism and to remove it is an attempt to erase an entire culture. A group of 150 drivers drove their vehicles, with Confederate battle flags flying from everyone, through Dalton over the weekend in protest of the flag’s removal. Law enforcement said the ride was not organized and police did not shut down any roads for it. However, police did urge the group to take the five-mile trip through areas of the city through that would have the least disruption in traffic flow and would be, in the police department’s opinion, safer.

Police did block off intersections to allow the impromptu parade through and provided a police presence. Officials said the department decided to provide those options in order to keep the event peaceful and safe for everyone. The group remained peaceful, but onlookers shouted obscenities at drivers as they passed.

South Carolina’s flag debate may be prompting a KKK protest in July, but it is apparently also leading to sparks of protest elsewhere around the South. Officials in the Southern states are torn between honoring the past and moving past the pain into the future. So far, the flags will be moved to museums and not remain on the grounds for the public to view.

South Carolina Flag Debate Is Prompting KKK Protest in July added by dareing.m on July 1, 2015
View all posts by dareing.m →