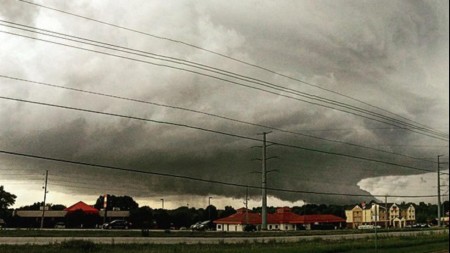 Reports of damage caused by tornado and the resulting flash floods which hit Lee’s Summit, Missouri are pouring in as Kansas City had been put on high alert until midnight. A tornado ripped through Lee’s Summit, Missouri close to 7 p.m. on Wednesday July 1, 2015, and was moving towards Kansas City in its southeast at 20 miles per hour. Officials from the fire department of Lee’s Summit have informed about the extensive damage caused by high winds in the city. The Lee’s Summit Police Department has informed that no injuries or casualties have been reported at the moment.

A funnel cloud was spotted near Unity Village and was moving southeast at around 6:30 p.m. The tornado first hit a strip mall close to Tudor Road and Northeast Douglas Street. The mall is located close to Lee’s Summit North High School and Lee’s Summit police station. Roofs were torn off, and a fireworks trailer and tent were overturned due to extremely strong winds near the school. Many buildings were also damaged in nearby areas. The Lee’s Summit Fire Department has informed that the tent and the trailer were not occupied and there were no injuries reported.

Many people who were stuck outdoors or in Plato’s Closet Store, tried to reach and find safe shelter inside the police station nearby, as the strong tornado winds chipped away bits of concrete roofing tile. Felicia LaBelle from Whiteman Air Force Base said that the scene was very scary and dangerous. However, nobody was hurt and people are safe at the moment. Many cars in the parking lot of the strip mall had broken windows as they were violently tossed and pushed into one another.

Pleasant Hill area was also affected by the tornado. Electricity supply was disrupted for around 4,000 customers of Kansas City Power & Light Co. according to their website at around 7:40 p.m. People have been advised to stay indoors as the tornado which hit Lee’s Summit, Missouri and the resulting flash floods have caused extensive damage, and is now headed towards Kansas City which had been put on high alert until midnight. Advisories have been issued against venturing out as the rough weather is expected to include hail and flash floods. 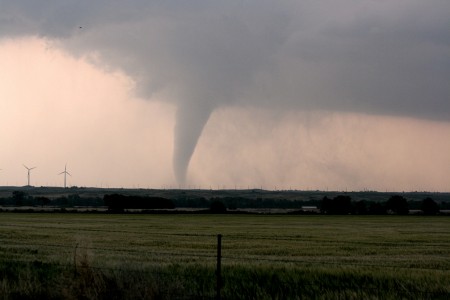 Warnings were also issued for most of the east-central Kansas and west-central Missouri. The official weather report informed that the tornado expected to be ripping through multiple counties could be destructive between Warrensburg and Raytown areas along with massive thunderstorms, as it moves towards the southeast direction. Flood warnings across the region were also issued due to heavy rains. Flash floods were reported in Pettis County, Lee’s Summit and Cass County. A woman who was hiding from the tornado in the basement of a store in Lee’s Summit got trapped when the floodwaters rushed in. She got swept away into a creek by the strong current as she tried to escape through a back door. Luckily for the lady, a vigilant police officer spotted her and then successfully rescued her.

People rushed into the interior rooms of their houses as they heard the tornado sirens. They heard rumbling noises for close to 30 seconds as the tornado hit. The walls of their building shook and vehicles slammed into them. Roofs were knocked off during this short time while cars were damaged and slate tiles were tossed around. A couple of trees also have been uprooted in the areas and gas pipelines were pulled out of the ground. Leeton, Mo. saw some damage early during the day while the eastern part of Kansas City was expected to see storms later on Wednesday, July 1. Meanwhile, tornado and flash floods have caused extensive damage in Lee’s Summit, Missouri as Kansas City was put on high alert till midnight.

Tornado and Flash Floods Cause Damage in Lee’s Summit, Missouri as Kansas City Put on High Alert added by Ankur Sinha on July 1, 2015
View all posts by Ankur Sinha →

4 Responses to "Tornado and Flash Floods Cause Damage in Lee’s Summit, Missouri as Kansas City Put on High Alert"