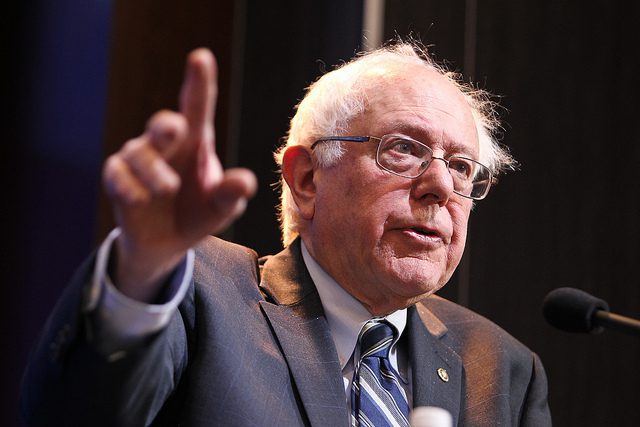 In the 1960s, Bernie Sanders was a civil rights activist. In more present times, he has firmly stood his ground during movements against the Iraq war and discrimination based on sexual orientation. His activist past was apparent at the Los Angeles Sports Arena on August 10, when 27,500 people gathered in his support in order to voice their opinions on social, financial, and environmental matters they believe need to be addressed. In total, about 100,000 citizens have attended rallies in support of the candidate, where this chant can usually be heard:  “Workers’ lives matter! . . . Black lives matter! . . . The truth matters!”

If he makes it into the presidency, Sanders has promised that he will strike against the corporations and people who, by his definition, have constructed an oligarchy. He is determined to assure the citizens of the United States that the country will get to the point of having a fair and just democracy, which he says is the foundation laid in the original blueprints of the nation. Fellow candidate Donald Trump’s self-advocation seemed to be drowning out the socialist Sanders’ voice, as demonstrated during a Sanders rally on August 10, which was mistaken for a concert by a group of Latinos just a couple blocks away. Recent polls, however, have suggested that Sanders has gained some ground on the current front-runner.

Sanders started his government career as a Vermont senator. When he decided to become a presidential candidate in the 2016 election, supportive fans began spreading his name and the locations of his rallies through social media, via word of mouth, etc., which reveals how determined some voters are to make sure his vision for the direction of the United States will be heard.

Some reformations he intends to make should he be elected president include free public college tuition and an emphasis on union power, abortion rights, and easy immigration, as well as the elimination of mass incarceration and improved minimum wage and social security systems. As a pacifist, he also wants to stop and prevent war, and also includes the war between humans and Mother Nature in his definition of the term. Many different groups have attended Sanders’ rallies in hopes that actions will be taken to support their causes if he does, in fact, win the presidential title. So far, mostly progressive and liberally-inclined groups have given him positive feedback.

As candidates for the next president of the United States of America are rolling in and running around to rouse up needed support, Sanders’ rallies for rights are proving to be very effective at spreading his name without the use of donations to finance various advertisements and campaigns. Instead, all of Sanders’ thrust is pushed by the people, and United States citizens have control of his wheel, as long as they are given opportunities during his rallies to speak out for the causes they believe in in hopes that the promises he makes will be upheld after the ballots have been counted.