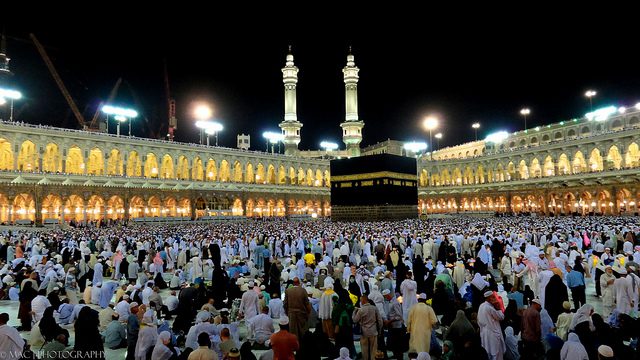 A construction crane, toppled by a powerful wind and lightning strike, collapsed into the Grand Mosque in Mecca on the anniversary of 9/11 at about 5:30 p.m. Saudi time, just before the beginning of evening prayers. The collapse killed as many as 107 people and injured at least 238. A photo, reportedly taken just before the collapse occurred, shows a gigantic bolt of lightning striking the crane. The collapse came just ten days before the beginning of the Hajj, the annual pilgrimage that may bring as many as 2 million people to the city.

The storm was so strong that it uprooted trees and broke windows throughout the city, reported Khaled Al-Maeena, editor of the Saudi Gazette in Jeddah, a nearby coastal city. He said that construction cranes in the area of the Grand Mosque were being used to make room for larger amounts of people in the pilgrimage, making it more manageable. He went on to remark that it was an irony that the expansion was being completed to facilitate the pilgrims who will be arriving. The crane fell through the Al Salam gate of the mosque. An employee of the mosque, Abdel Aziz Naqoor, reported that he saw the crane collapse after being hit by the storm.

Another strange irony surrounding the disaster is that the construction was being done by the Binladen Group, which was founded by the billionaire father of Osama Bin Laden, according to World News Daily. The powerful company controls many major building contracts in Saudi Arabia, according to the same report. Bin Laden masterminded the attacks on the World Trade Center and the Pentagon on September 11, 2001. Sixteen of the plane hijackers who carried out the attacks were Saudi Arabian nationals. The irony of the falling of the construction crane in Mecca, the heart of Islam, and collapsing a portion of the Grand Mosque has not escaped the thoughts of many.

The Binladen Group was in charge of making expansions to the area in preparation for the Hajj, a pilgrimage which brings millions of Muslims to the holy city to visit the Kaaba, a large cubic structure in the middle of the mosque grounds. The Hajj is one of the five pillars of Islam that all Muslims must take part in at least one time in their life. In 2015 the pilgrimage is on September 21-26. Muslims believe that the Hajj correlates with the story of Hagar, one of the wives of Abraham. Left in the desert, she and her son, Ishmael, prayed to God for mercy and he provided water when Ishmael hit the ground with his heel. When Abraham returned, he and Ishmael built the Kaaba to surround the black stone believed to have been given to Abraham by the angel, Gabriel.

At the Kaaba, which means “cube,” Muslims perform a series of rituals which include walking and running around the shrine counter-clockwise seven times, kissing it, and saying prayers. Over 3 million people have made the Hajj, most coming from outside of Saudi Arabia. Non-Muslims are not allowed into Mecca.

It is important to look at the history of Mecca and the Hajj in order to understand the significance of the crane collapse. Had it occurred during the time of the pilgrimage, many more people would have been killed and injured. Some of the people of the city feel that authorities have not provided effective safety provisions for construction in the city. Irfan al-Alawi, a co-founder of the Islamic Heritage Research Foundation, expressed concern that the city authorities had been negligent in allowing the large cranes near the mosque. He feels that the Mecca crane would not have fallen on the Grand Mosque had proper precautions been taken.