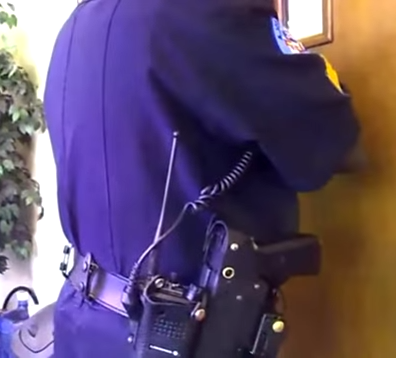 Recently a police officer interrupted a church service with a court order to take a child into custody. The video from the officer’s body camera has gone viral causing a major upset with the religious community. Leaders in the service could be heard yelling at the officer about their constitutional rights and saying she had no authority to enter their church. This incident is a classic example of religious organizations failing to understand the separation of church and state.

Upon viewing the viral video, Pensacola Officer Meghan Darling could be heard outside of the sanctuary attempting to present the court order and remove the child in a very respectful and peaceful manner. The situation went awry as church officials refused to turn the child over to the officer and demanded Darling wait until the service ended. The officer politely refused and could be heard asking members of the church to refrain from putting their hands on her.

After leaders of the church refused to cooperate, Darling called for a supervisor and ultimately entered the sanctuary to remove the child herself. Instantly, congregants grabbed their smartphones and began recording what they felt was an intrusion of their Constitutional rights as worshipers. They yelled at the officer telling her to leave the building and stated she had no right to be there. They asked if Darling understood the Constitution that she is

authorized to abide by. Not one time during the dispute did the officer lose control of her professional demeanor or act irresponsibly to the vow she had taken when she joined the ranks to protect citizens of this great country.

Instead, after the video of the officer’s actions went viral the only people who acted inappropriately were the ones inside of the church building. The father of the 13-year-old girl was present with the officer when the court order was presented. The incident took place at Allen Chapel African Methodist Episcopal Church where the child’s grandfather, Reverend Freddie Tellis, is the pastor. He stated that the grandparents had many opportunities to return the girl to him but had failed to do so. Although many have criticized the officer, Pensacola Police Chief David Alexander III says that she was perfectly within her rights to fulfill her duty. He added:

We certainly respect the fact that it is a church, but we also respect the fact that lots of times we have to respond to churches because there are problems. The father asked for help and we were trying to resolve this thing in the most peaceful way possible. The pastor was aware of the court order and at some point had communicated that if the officers came for the child, he would surrender the child. However, that did not take place, and this turned out to be a long, drawn-out issue between him and his son-in-law”

In a classic case of a religious organization misinterpreting the separation of the church and state, Tellis said the police had no authority to interrupt their service with a court order. He respects the officer’s job but feels it could have been handled differently. According to the pastor, “Just as he respects the law, police officers must respect people’s religious freedom.” However, according to Alexander, any church that is incorporated in the state of Florida is incorporated as a public place.

The child custody battle was shoved into the spotlight when the video which captured the police interrupting the church service went viral. Not only was the incident recorded on the officer’s body cam, but parishioners were advised by the pastor to take out their cellphones and capture the encounter as well. Many within the religious community feel the officer should have waited until the service ended, but the police chief maintains that Darling operated within her duties when she entered the Allen Chapel African Methodist Episcopal Church. Perhaps it is time for the church to revisit the principles of the Constitution as it relates to the separation of church and state.