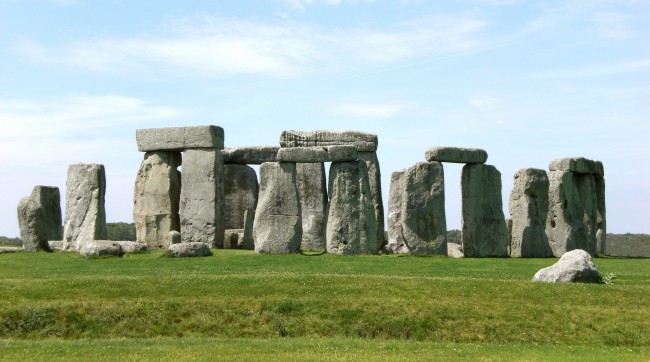 The giant over-4,500-year-old stones at Stonehenge have long fascinated and impressed anyone who has seen them. But, they might not be as impressive as the new prehistoric giant rock formation scientists have found and dubbed “super-henge” near Stonehenge. As one archaeologist enthused about the finding that is “Everything previously written about the Stonehenge landscape and the ancient monuments within it will need to be re-written.”

Using radar machines, archaeologists discovered a row of more than 90 stones, some as tall as 15 feet, buried under the bank of a stone enclosure at Durrington Walls. They are approximately 1.5 miles away from the famous stone circle, in the Salisbury Plain at Wiltshire, England.

The gigantic stones look to be arranged along a straight edge that curves at one end into a C-shape. The “super-henge” boulders appear on the radar to be pushed over like giant dominoes and are now buried under three feet of earth. The structure is believed to mark a processional route but, just like Stonehenge, the exact use is sure to generate speculation for centuries.

“It’s utterly remarkable,” enthused one of the lead archaeologists Professor Vince Gaffney from the University of Bradford. “It’s just enormous. We’re looking at one of the largest stone monuments in Europe and it’s been under our noses for something like 4,000 years.”

At this point, they are not sure what the buried stones are made of. However, given that they are the same height as the sarsen sandstone ones in the Stonehenge circle, they are likely to be the same kind.

Up close, some people remark upon visiting that the monument at Stonehenge seems smaller than they expected. However, the feat involved in erecting those famous stones, which weigh up to 50 ton, has always seemed remarkable, Now, the new discovery of a far larger grouping of stones that were also moved to and erected in the area makes the construction feat of the duo, likely from the same period, even more amazing.

The new stone formation is not the first surprising discovery in the area so far this century. Since 2003, scientists have been conducting excavations and research in the area, particularly on the henge at Durrington Walls, because the land formation seemed unusual. Now, they realize that the land formation forming a “C” was due to the rocks below.

In 2007, an ancient village was found in the area. The 4,600-year-old ruins of houses in the area probably housed the workers who erected the stone monuments on Salisbury Plain. They may have also been the people who used the formations for worship, the purposes that has long been believed.

The latest discovery lends credence to the belief that the ring of standing stones and earthworks at Stonehenge was part of a much larger religious complex. As Gaffney noted, it suggest that there was an unexpected phase of monumental architecture in prehistoric England.

Stonehenge is one of the best-known relics of prehistoric times in Europe. The presence of other massive stones, building ruins and such suggests the area may have been one of the largest Neolithic settlements in Europe. It will take years before more is known, and stones possibly unearthed at the super-henge rock formation found using radar near Stonehenge, but the discovery is sure to launch a lot of speculation.