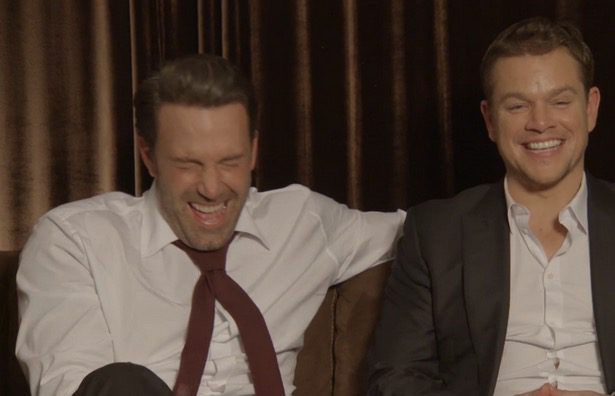 Matt Damon seems to think that Jennifer Garner is mostly to blame for her divorce to soon-to-be ex-husband Ben Affleck, it has been alleged. According to OK! magazine, the outlet’s sources claim that Damon has remained by his pal’s side ever since the couple announced that they were divorcing back in June.

Many reports at the time had claimed that Affleck was often sleeping over at Damon’s house over constant arguments he was having with his wife during that time. It almost became a habit for the Argo actor to sleepover at his friend’s home due to the supposed fact that Garner was not making life easy for the 43-year-old, who opted to avoid confrontational feuds by not returning home for many days of the week.

OK! magazine alleges that Damon was surprised to have seen the twosome last as long as they did, especially when one considers how many times the couple was said to have been arguing. If Affleck really was spending more nights at Damon’s house than his own, it would make sense as to why the couple were so unhappy and finally decided to call it quits.

“Matt believes Ben’s marriage was in shambles way before the nanny, there was too much anger there. If she had just loosened up a bit, things would have been different,” the source dished, making it seem as if Garner is at fault for everything that transpired. Christine Ouzounian, the pair’s former nanny, was said to have had an affair with Affleck during his marriage to Garner, which evidently led to her being fired from her duties once the 13 Going On 30 actress found out about it.

But judging by the quote alone, Damon seems to think that Garner should have seen it coming; neither of them was happy, and with the idea that their marriage had been crumbling for months, she should not have been surprised. It is also interesting to see the source add that the 43-year-old seemed really uptight in all things regarding her marriage and how things were supposed to be done.

The outlet does not elaborate on how Garner could have loosened up more, but it is quite clear that the mag is trying to convey the idea that the soon-to-be single mother-of-three does not know how to have a little fun. Affleck, on the other hand, is all about having a good time with his friends, having famously dealt with a gambling addiction that saw him spend thousands of dollars every other night he was out and about, TMZ reported at the time.

It was just recently confirmed that Affleck and Garner have decided to put their $45million Los Angeles home on the market, making it perfectly clear that chances of a possible reconciliation are not happening. The two have remained cordial in recent months — or better yet, since they announced their divorce — simply for the fact that they have three children they still have to raise. Garner wants to end her marriage knowing Affleck will still play a key role in her children’s life.

OK! magazine: Matt Damon Does Not Like Jennifer Garner, Doesn’t Want Ben Affleck To Get Back With Her