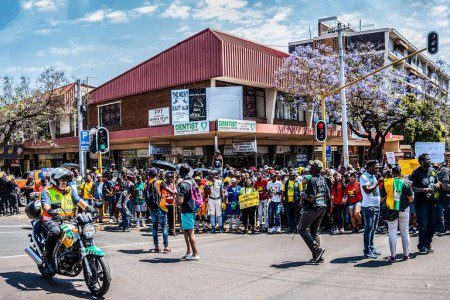 The financial situation in South Africa is in dire need of improvement as the country runs out of money. The government will not be able to service its debt as this is set to rise. There is a vast amount of waste in the economy, and the amount of money that is stolen is a massive problem. The African National Congress (ANC) ruling party have no plans to grow the economy and alleviate poverty.  The ANC needs to clean up the mess and a good place to start would be within the political party, at the top.  The South African economy is poorly run, and the ANC government is losing control of the situation by not taking action to alleviate the crisis.

The government has not provided the supply side reforms which the International Monetary Fund (IMF) has been advising every six months. Not because the ANC differs ideologically with the IMF, but purely because the government is ineffective and weak. Such policy reforms include: limit labor unrest on platinum mines, improve education and skills, fix Eskom, create more jobs, diversify away from resources and agriculture, and cap public sector wage bill.

A general rise in costs, such as salaries and prices of items such as food, fuel, education, is called inflation. The cost of living becomes too high for many people, and current funds are not sufficient to cover things that it bought before the increase. The government knows that there will be riots if necessities of life go beyond the rich of the majority. The Reserve Bank uses interest rates to put a lid on inflation and increase the interest rate to deter people from using credit facilities. It has done this successfully since 1998.  Rising inflation erodes incomes of the poor and the rich are not affected.

Some economists in and out of the ANC believe that the high public sector wage bill along with salary demand of platinum workers could force companies to pass the cost on to consumers. This wage increase is too high, and the conclusion is that it is inflationary. The salary earners will be happy that there is more money in their pockets. However, as it triggers price increases in the rest of the economy, the resultant inflation will come back and take that money away due to the rising cost of living. If wage negotiations were not militant-driven and politicized maybe the workers would accept, offers and employers would be more receptive of better salary increases.

Before making demands from banks and investors, it might be a lot wiser to make sure that government is cleaned up. The voters have the muscle and need to understand that keeping a government in power in exchange for social grants does not lead to economic growth. Messing around with business is foolish. The rich are carrying a very disproportionate share of the tax burden in South Africa and are not coping while the ANC brags about the number of dependents the party has secured by way of granting social benefits.

Public debt is set to increase as government spending continues to rise, and this will have a negative impact on South Africa. The government has not been able to create enough jobs to reduce unemployment. Anti-government protesters are another setback and cause a bleak outlook for the country. South Africa has reached a stage where there is little room for maneuver and all future spending by government will have to be carefully considered.

South Africa is now an appalling nation because it is governed and influenced by a corrupt and immoral political party. The corruption is scaring global businesses away.  Who would want to deal with a government that is corrupt, incompetent and not be trusted?