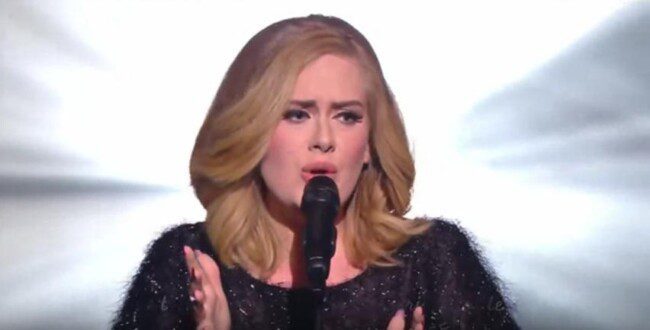 Even those under a rock this past month could not avoid the news that Adele is releasing her first album in four years on Nov. 20, which will be called 25. She surprised the world with her first single in years, Hello, on Oct. 23, which hit number one immediately. (So did the album even though it is not out yet because of presales.) Call it pent-up demand or just plain excitement, but Adele is everywhere on television and news covers in a media blitz ahead of a blitz on the airwaves and charts with her new songs later this month.

After largely hiding out and being mom her 3-year-old son, Adele is back in public view in a big way. The songstress is currently on the cover of Rolling Stone and other publications. The singer performed Hello last week in Cannes, France, at the NRJ Awards in a stunning performance widely seen on the internet. She is doing a concert on Tuesday, Nov. 17, at Radio City Music Hall in Manhattan that will be taped for a one-hour NBC special, Adele Live in New York City, to air on Dec. 14. She is performing on Saturday Night Live on Nov. 21 (she was last on the show in 2008). She is reportedly also scheduled for The Tonight Show on Nov. 23 and Today on Nov. 25. There is a forthcoming Adele BBC special too (and probably another media blitz) for those across the pond.

There is reason for the demand and hype. Adele was massively successful a few years ago. The singer was Rolling in the Deep with award after award from her 2011 album, 21. That album, largely about break ups and loneliness, had phenomenal success, selling more than 23 million copies the first two years, sitting at number one for 24 weeks, and staying on the Billboard charts for 245 consecutive weeks. Besides all the Grammys and comparable awards in other countries, she picked up an Oscar in 2013 for Skyfall, the hit song she sung and co-penned from the James Bond movie of the same name.

The now 27-year-old singer has admitted that she is a hard act to follow, even for herself. “I didn’t think I had it in me to write another record. I didn’t know if I should. Because of how successful ’21’ was, I thought, ‘Maybe everyone’s happy with that being the last thing from me. Maybe I should bow out on a high,'” she told the Los Angeles Times. But, she realized she had more to say and sing, and hoped the public would want her often-delayed next effort.

Adele also realized that she wanted to, if her body (or voice) will let her, tour the U.S. because, as she told Rolling Stone, “I haven’t done it properly.” The planned tour when she released 21 was cut short when she had a vocal cord hemorrhage and underwent surgery. So with only limited tour dates from 2008 (her first album) and 2011, and all those hit songs, she will undoubtedly be a big draw (which NBC and the BBC are clearly banking on with their specials).

So with the Adele media blitz making sure everyone knows about the new music she made, the demand and sales when 25 is released on Friday should be huge. The advance interest in her third album certainly is.

Sources:
Los Angeles Times: Adele cries over her own music when it’s good; opens up about son and boyfriend
Forbes: Adele Focuses On The Music And Here’s What It Could Mean For Her Earnings
Daily News: Adele says she won’t endorse any brands: ‘I don’t want to be the face of anything’